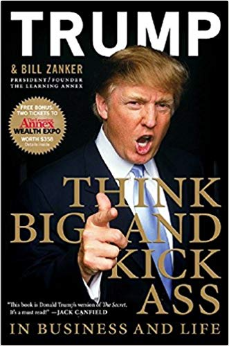 A 2007 book authored by Donald Trump features a chapter breaking down how it’s crucial to exact revenge on enemies.

In Think Big and Kick Ass: In Business and in Life, Trump dedicates Chapter 6 to the importance of getting revenge on people who wronged him.

“My motto is: Always get even,” he wrote. “When somebody screws you, screw them back in spades.”

Trump goes on to describe various situations in his life where he retaliated against someone who didn’t pay back a favor, or who went out of their way to say something negative about him. He also writes that he takes pleasure in seeing the people who attacked him receive their just deserts.

Mind you, this was petty vengeance over simple social faux pas – with the latest Russian hoax witch hunt they tried to overthrow his election and frame him for betraying the nation — that amounts to treason, punishable by death!

Perhaps the Deep State should have reviewed this chapter before going all in on the Russian collusion delusion.

“Before I even got elected, it began,” the president told reporters Sunday regarding the Russia hoax. “And it began illegally. And hopefully, somebody’s going to look at the other side. This was an illegal take-down that failed.”

Check out Chapter 6 of Trump’s book, Think Big and Kick Ass: In Business and in Life, entitled “Revenge,” via YouTube: