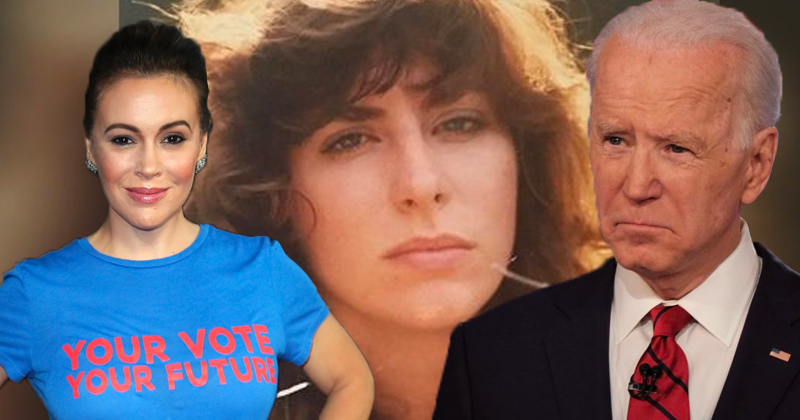 On Monday, Milano released a statement in reference to Reade’s allegations against Biden saying she deserves to be heard.

I’m aware of the new developments in Tara Reade’s accusation against Joe Biden. I want Tara, like every other survivor, to have the space to be heard and seen without being used as fodder. I hear and see you, Tara. #MeToo

“I’m aware of the new developments in Tara Reade’s accusation against Joe Biden,” Milano tweeted Monday evening. “I want Tara, like every other survivor, to have the space to be heard and seen without being used as fodder. I hear and see you, Tara. #MeToo.”

Milano had been weathering criticism after she voiced support for Biden earlier this month despite accusations which surfaced in March from the former staffer, who claimed the former vice president in 1993 put his hand up her skirt and penetrated her with his fingers.

In an interview in early April, Milano explained she didn’t feel enough evidence had been presented against Biden for her to speak up against him.

I explained my silence on the allegations against Joe Biden in this clip.

I am still endorsing @JoeBiden. Listen to this clip to find out why. #MeToo #TimesUp https://t.co/6v7udELEzv

“I just don’t feel comfortable throwing away a decent man that I’ve known for 15 years in this time of complete chaos without there being a thorough investigation and I’m sure that the mainstream media would be jumping all over this… if they found more evidence through their investigation. So, I’m just sort of staying quiet about it,” Milano said at the time.

You are a fraud. This is about holding the media accountable. You go after Trump & Kavanaugh saying Believe Victims, you are a lie. You have always been a lie. The corrupt DNC is in on the smear job of Tara Reade, so are you. SHAME https://t.co/B7NHK4k09K

But on Monday, Reade’s former neighbor lent credence to the allegations, claiming she remembered discussing the incident with Reade, who was upset and crying following the assault.

“We were talking about violent stories,” the neighbor, Lynda LaCasse said, “because I had a violent situation. We just started talking about things and she just told me about the senator that she had worked for and he put his hand up her skirt.”

Speaking with Fox News on Monday, Reade also turned up the heat on Milano, blasting her for believing the spurious allegations against Brett Kavanaugh, while dismissing her own claims against Biden.

“I think we need to compare how she responded to Brett Kavanaugh… quite different than the talking points she [used] regarding Joe Biden,” Reade said in an interview with Fox. “She never reached out to me. I don’t really want to amplify her voice because I feel like she hijacked my narrative for a while and framed it about herself… she knows nothing about it.”

It remains to be seen what effect Reade’s allegations will have Milano’s support for Biden and the leftist #MeToo movement.

FOX news embellishes the lies about the Obama raid that killed bin Laden, adding Joe Biden to the fable. And, a FLASHBACK to 2005 where Hollywood Producer Aaron Russo, interviewed by Alex Jones, relates what his Rockefeller friend told him what society would become in the near future— what we are seeing today in 2020