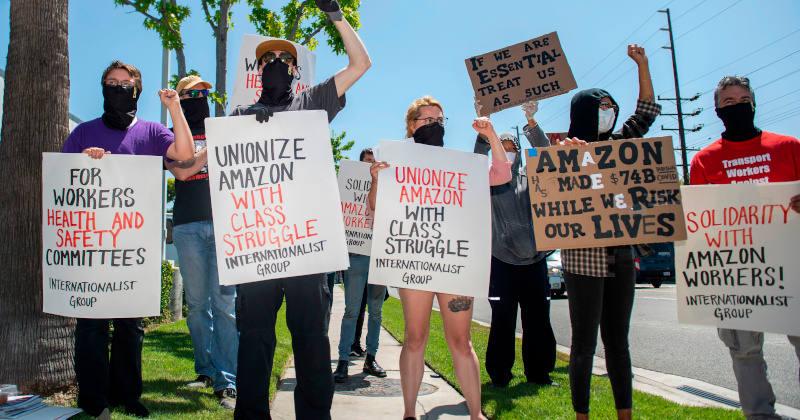 Amazon is in search of “intelligence analysts” capable of tracing “threats” from organized labor, according to two recently surfaced job listings, which the company swiftly deleted after they received attention from the press.

The two job listings said the company was in search of new intel analysts for its Global Intelligence Program, both of which were to be based in the Phoenix, Arizona area.

One of the employees would be tasked with tracking “sensitive topics that are highly confidential, including labor organizing threats against the company,” as well as “funding and activities connected to corporate campaigns (internal and external) against Amazon” and other “dynamic situations,” such as protests and geopolitical crises.

“Individual analysts will work directly with Sr. Corporate Counsel to compile and provide assessments for use in court filings, up to and including restraining orders against activist groups; intelligence assessments are used by Legal to demonstrate to [a] court of law that activist groups harbor intent for continued illegal activity vis-à-vis Amazon.”

Got a copy of the anti-union job posting @Amazon didn't want you to see. Too many eye-popping details for one tweet, but the gist is Amazon wants to ID "labor organizing threats against the company" and use info to get "restraining orders against activist groups" pic.twitter.com/Rh9yjN8qj0

The second listing, which made no mention of tracking down “threats,” also refers to labor organizers, saying analysts should be well versed in topics including “organized labor, activist groups, hostile political leaders” as well as “hate groups, policy initiatives, geopolitical issues, terrorism, [and] law enforcement.”

The job offers – which appear to have been spotted first by cyber security analyst Joe Slowik – had been posted since January, however Amazon deleted both pages on Tuesday, as the listings made their way into media reports and sparked controversy.

“The job post was not an accurate description of the role – it was made in error and has since been corrected,” company spokesperson Maria Boschetti said in a statement emailed to media outlets.

Given that Amazon’s ‘correction’ of the supposedly erroneous pages came some 8 months after they had been publicly viewable, and only after multiple press reports called attention to them, critics were not impressed with the company’s response, which drew heated condemnation online, including from Vermont Senator and self-avowed socialist Bernie Sanders. Others, meanwhile, said Amazon was engaged in “union busting” and efforts to “silence workers.”

Disgusting. Jeff Bezos became the richest man on Earth while spying on, underpaying, and mistreating his workers.

We must build a powerful trade union movement to stand up to the billionaire class and finally say: Enough. You cannot have it all. https://t.co/9gjeWv67D6


Amazon is actively hiring two intelligence analysts to track "labor organizing threats" within the company, a terrifying attempt to silence workers and squash growing unionization efforts around the country.https://t.co/gHKzOdbZcg


The company has come under fire in recent months as employees complain of unsafe working conditions amid the coronavirus pandemic, some even saying they were fired for speaking out about a lack of protective equipment. The e-commerce giant also took heat after slashing a $2 wage increase enacted at the height of the Covid-19 crisis, even as CEO Jeff Bezos sees his fortune explode, with government-imposed lockdowns worldwide forcing millions to do their shopping online.