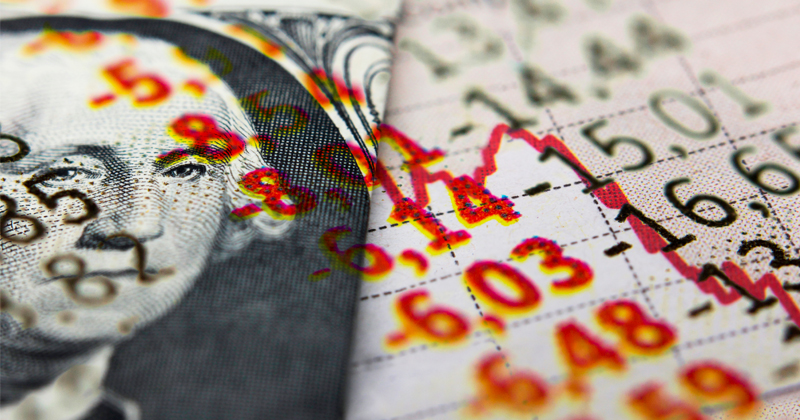 Last week, we got bad news in the manufacturing sector. The ISM index of national factory activity dropped to a 10-year low. It was the second straight month the number was below 50, which indicates a contraction in manufacturing.

That news sent stock markets into a tailspin. This was followed up by a very week service sector report the following day.

In his most recent podcast, Peter Schiff said the service sector is about to follow manufacturing into recession. He also talked about the recent employment numbers and explained how the Fed is acting like a Soviet Politburo.

The ISM nonmanufacturing index came in at 52.6% for September, down from August’s reading of 56.4%. The data was much weaker than expected. The consensus forecasts projected a reading of 55.5%. It was the lowest reading in three years. The mainstream pundits warned that the disappointing service sector data could boost recession fears as this is the largest component of the US economy.

On that news, the Dow shed another 300 points.

But then stocks rallied later in the day. Why? Because the probability of an October interest rate cut shot up to 90%.

“So, what basically saved the market was the increased probability that the Fed was going to come to the rescue of the market by cutting rates.”

Keep in mind – the manufacturing economy is already in a recession. Retailing is also in a recession.  In fact, US shopping mall vacancies have hit an 8-year high. According to data from Moody’s Analytics’ Reis, 9.4% of units were unoccupied in Q3. That equals a post-financial crisis high reached in 2011.

But Peter doesn’t think the Fed has enough up its sleeves to actually make a difference.

“I think that there already is enough expectations for rate cuts that the probability going up is not enough to really put in a floor on the market.”

When the stock market tanked during the fourth quarter of 2018, the central bank was able to reverse the decline because of a substantial reverse in policy with the “Powell Pause.” At the time, the Fed was pushing rates up and the central bank was engaging in quantitative tightening.

“When the markets responded to those threats by collapsing, the Fed was able to do a complete policy 180, going from rate hikes to rate cuts, and in fact, going from quantitative tightening to effectively having quantitative easing. But if all that is already in play, if the markets start to tank again, I don’t really think there’s enough ammunition left in the Fed’s chamber there to have a meaningful impact on the markets, and I think traders are overestimating the ability of the Fed to rescue the market the way it has rescued it in the past.”

If you go back to QE3, the Fed was buying $85 billion worth of debt instruments every month.

Peter pointed out that the nature of the program is different. The Fed is taking in more short-term debt instruments. But the principle is the same as QE.

“The Federal Reserve is creating money out of thin air and then using the money that it creates out of thin air to buy up debt instruments for the sole purpose of preventing interest rates from rising.”

In a nutshell, the Fed is trying to manipulate the interest rate. The bureaucrats at the central bank are substituting their judgment for the market’s.

“This is no different than a Politburo in the Soviet Union deciding what the price of bread is going to be.”

Peter also dug into the most recent jobs report in this podcast. As usual, it’s not what the mainstream is making it out to be.