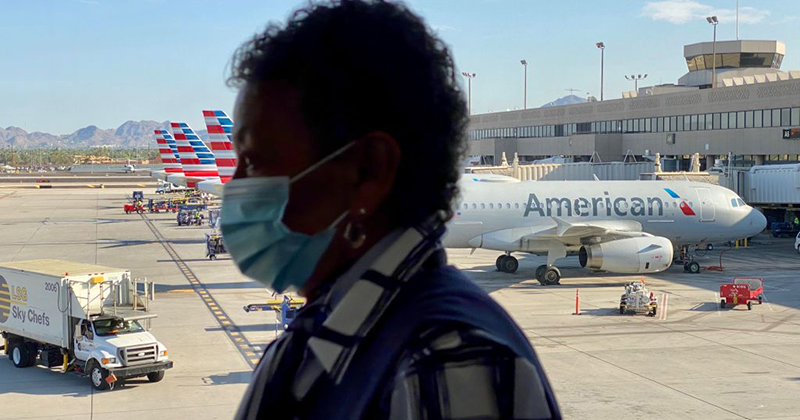 American Airlines has come under criticism from employees who were told that the company now encourages them to wear black lives matter apparel on their uniforms, and is having badges made specifically for this purpose.

“We are working with our Black Professional Network on designing a specific pin that may be worn with the uniform. In the interim until this pin is produced, to recognize the significance of this moment in history, we are allowing people to wear a Black Lives Matter Pin,” Jill Surdek, senior vice president for flight services, announced.

The New York Post reports that some employees and their relatives are disgusted by American promoting a group that engages in violence.

“I take offense to this,” a long time flight attendant reportedly complained to management, adding “Serious offense. My husband is a LEO (Law Enforcement Officer), as was my deceased father and as far as I’m concerned ALL LIVES MATTER.”

“I am completely disgusted at the fact that we can’t show support for our GOD, our COUNTRY, our LEOs but when it comes to BLM organization (which is controversial in itself), American Airlines says that’s obviously different,” the attendant added in an email obtained by the newspaper.

“How is that right? Well, I don’t feel included,” the attendant emphasised.

According to the report, one flight attendant asked American if they could wear a ‘Blue Lives Matter’ pin instead, and they were told that wouldn’t be allowed.

#AmericanAirlines Instead of supporting Blue Lives or All Lives, this company is supporting a Hate group! BLM pins are being made for all their workers to wear! A Flight Attendant asked if they could wear a Blue Lives Matter pin instead, they were told, NO! COMMENTS? pic.twitter.com/wuT4rTqPVG

The report adds that:

Another flight attendant who asked to be identified only as John said staffers who refuse to wear the pin will now “be ostracized and labeled as racist,” and described BLM as “a terrorist organization that promotes violence to further their agenda.”

“If this pin is sanctioned, I will wear my NYPD pin supporting the police department,” he said.

The violent crime rate for black folks is what it is because Democrat run cities have created a sociological economic nightmare for black Americans for decades.

Responding to the complaints, a statement from American claimed that the company’s move is “not political” and “doesn’t mean other lives don’t matter, rather that in our society black lives should matter and be valued the same as others.”

This past weekend, Senator Rand Paul called for an investigation into where financial support for the BLM movement is going, given the rioting and violence that is occurring at many BLM marches.