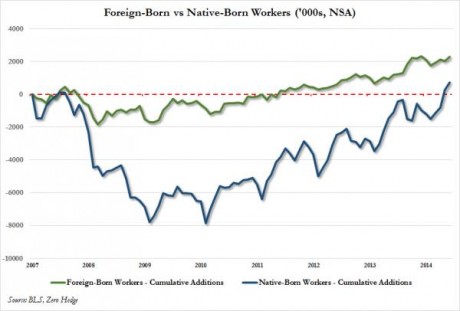 A horse named “American Pharoah” just won the Triple Crown.  Is this some sort of a sign for America?

The office of the presidency was greatly strengthened under previous administrations, but now Barack Obama has grabbed an unprecedented amount of power for himself.  In this article, I am going to focus on immigration, but Obama’s power grab is certainly not limited to this area.  And as I have written aboutpreviously, if there is some sort of major “national emergency” over the next year or so, the legal framework has already been created for Obama to use his “emergency powers” to take total control of virtually everything.  So is comparing Obama to the pharoahs of ancient Egypt unfair?  I don’t think so at all.  He is certainly acting as if he would like the powers of a dictator, his policies in the Middle East would make the pharoahs proud, and without a doubt Obama loves the adoration and worship of his fans.  In my opinion, he is the closest thing to a pharoah that the United States has ever seen.

Just consider Obama’s approach to immigration.  The laws of our land require him to protect our borders, but he has left them wide open and has openly encouraged illegal immigration because that is what he decided was best.  He also attempted to use his “executive powers” to grant amnesty to millions upon millions of immigrants that were in this country illegally.  Fortunately, that action has been blocked in the courts (at least for now), but Obama says that he is going to keep trying to do everything he can to “bring them out of the shadows”.

Personally, I am someone that believes that the United States will always need a certain level of legal immigration.  But the key word there is “legal”.  It is absolutely imperative that we require everyone to come in by the front door, so that we can weed out those that would be damaging to our society.  But instead of adopting a system that makes sense, we have left the back door wide open while making it extremely challenging to come in through the front door.  As a result, we have seen an endless flow of gang members, drug dealers, serial criminals, welfare parasites and political radicals enter this country illegally.  We have made it really easy for the “bad guys” to come in, but extraordinarily difficult for the “good guys” to move here.  What we are doing does not make any sense at all.

And thanks to our foolishness and the refusal of recent presidential administrations to enforce the law, all of this immigration has fundamentally altered the employment picture in this nation.  According to the latest numbers, nearly all of the job gains that the U.S. economy has experienced since 2007 have gone to foreign born workers…

Assuming, the Household and Establishment surveys were congruent, this would mean that there was just 1K native-born workers added in May of the total 280K jobs added.

Alternatively, assuming the series, which is not seasonally adjusted, was indicative of seasonally adjusted data, then the 272K increase in total Household Survey civilian employment in May would imply a decline of 7K native-born workers offset by the increase of 279K “foreign borns.”

But while all of these comparisons are apples to oranges, using the BLS’ own Native-Born series, also presented on an unadjusted basis, we find the following stunner: since the start of the Second Great Depression, the US has added 2.3 million “foreign-born” workers, offset by just 727K “native-born”.

This means that the “recovery” has almost entirely benefited foreign-born workers, to the tune of 3 to 1 relative to native-born Americans!

It is getting to the point where we have a national epidemic on our hands.  According to one recent study, nearly one out of every 10 workers in the entire state of California is here illegally.  Imagine how much easier it would be to get a job in that state if the illegal workers were not part of the equation.

And of course it isn’t just employment that we need to be concerned about.  Thanks to unchecked illegal immigration, there are now 1.4 million gang members living in our cities, and these gang members often commit crimes that are absolutely horrific.  For example, the following is from an article about a crime that was recently committed by members of MS-13…

Three teenage reputed members of the MS-13 street gang were ordered held without bail Friday on charges they forced a 16-year-old into a wooded area of a Long Island golf course, where two of them took turns raping her while the third stood as a lookout.

‘This is one of the most brutal, heinous crimes that I have seen in a long, long time,’ Suffolk County District Attorney Thomas Spota said at a news conference following the suspects’ arraignments.

If Barack Obama had protected our borders like he should have, those members of MS-13 would have never gotten into this country and they never would have raped that girl.

But instead of admitting that what he has done has been wrong, Pharoah Obama is doubling down on his current approach.  He insists that leaving the border wide open is “the right thing to do”, and he pledges to “bring more undocumented immigrants out of the shadows”.  The following comes from the Examiner…

After executive amnesty was blocked in the courts and in the House the last two days, President Obama used his weekly radio address to ridicule House Republicans for blocking a vote on immigration reform, while promising that he would keep up the fight for undocumented immigrants.

“I’m going to keep doing everything I can to make our immigration system more just and more fair,” Obama said. “Last fall, I took action to provide more resources for border security; focus enforcement on the real threats to our security; modernize the legal immigration system for workers, employers and students; and bring more undocumented immigrants out of the shadows so they can get right with the law.”

“Some folks are still fighting against these actions,” Obama said, without directly naming the legal hurdles his executive actions face. “I’m going to keep fighting for them. Because the law is on our side. It’s the right thing to do. And it will make America stronger.”

And if Obama has his way, this is only just the beginning.

I have previously written about the devastating impact that the Trans-Pacific Partnership will have on our economy, but did you know that this secret new treaty that Obama is negotiating will also allow for the free flow of people within the Asia-Pacific region?  The following comes from WND…

The European Union was founded on “four freedoms”: the free flow of people, goods, money and services among members. We learned at a recent White House press conference the Trans-Pacific Partnership will ensure “people, goods and money will flow freely within the Asia Pacific region.”

So what does that mean?

Will immigrants be able to move around the nations that are involved in the Trans-Pacific Partnership as freely as they do in the European Union today?  Mexico is one of the countries that will be a part of this new treaty.  Does that mean that people will now “flow freely” between our two nations?

We have seen it time and time again – once Obama is blocked one way, he just comes back and tries to advance his agenda another way.  When he promised to “fundamentally transform” this country, I don’t think that most people had any idea of what we would really be in for.

At this point, many regard Barack Obama as a “lame duck” president that is on his way out.

I don’t see it like that at all.  In fact, I believe that the most tumultuous time of Obama’s presidency is still to come.

Do you agree?  Tell us what you think the remainder of Obama’s time in the White House will look like by leaving a comment below…