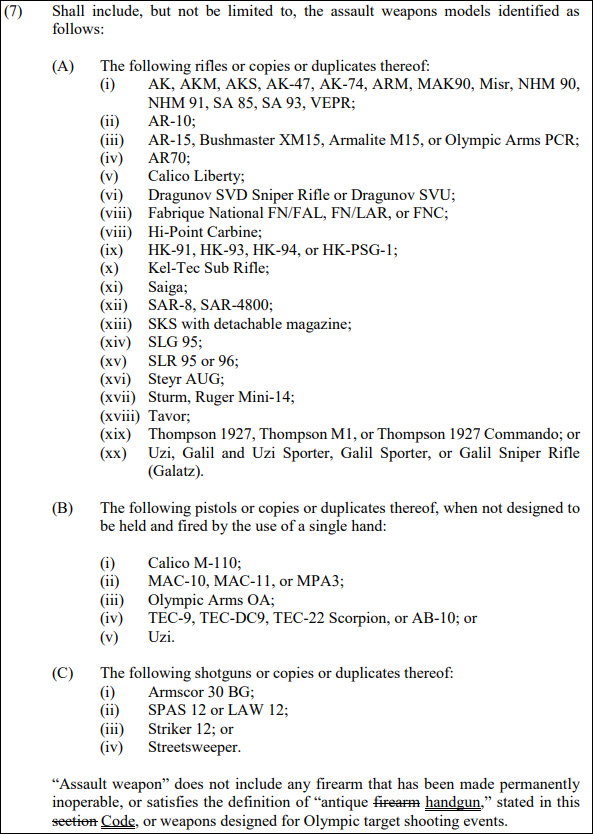 A village in Illinois has declared a ban on “assault weapons,” and has given gun owners 60 days to turn them all in.

After June 13, residents of the Village of Deerfield have 60 days to sell, render inoperable or turn their “assault weapons” over to local police.

“Any person who is found to have violated this Article shall be fined not less than $250 and not more than $1,000 for each offense,” reads the ordinance penalty, “and a separate offense shall be deemed committed on each day during or on which a violation occurs or continues.”

The village defines an “assault weapon” broadly, including rifles with fixed magazines that are capable of accepting magazines holding more than ten rounds, certain pistols with detachable magazines, and certain shotguns.

“Large capacity magazine means any ammunition feeding device with the capacity to accept more than ten rounds,” the ordinance states.

“The Chief of Police or his or her designee shall have the power to confiscate any assault weapon of any person charged with a violation under this Article,” reads Section 15-91.

Weapons and magazines surrendered or confiscated will be recorded and destroyed by police.

Several concerned citizens sounded off on the unconstitutional measure at town hall meetings.

“Of the 26 people who spoke” on March 19, “15 were against banning assault weapons and high-capacity magazines and 11 said they wanted it to become law,” reports the Chicago Tribune.

Army and National Guard veteran Patrick Murphy said the ban would eventually lead to a ban on all guns.

“[Murphy] equates this ban to banning a specific vehicle because it could kill, banning certain types of dogs, or banning certain guns from everyone including law enforcement. He expressed concern that there will first be a ban on assault weapons, then shotguns, then hand guns,” a copy of the meeting’s minutes reads.

Another resident pointed out media focus on gun deaths was disproportionate and one-sided.

“There have been a lot of emotional and reactionary things going on since the Parkland, Florida, event,” said Wheeling resident Rich Bierman.

“Today, 115 people on average died from opioid overdose. The media attention to one event is enormous, but the media attention to overdoses is not even close. Although there is an intensive amount of attention during mass shooting events, the media pushes the agenda to an extreme. Opioid overdose will not get national coverage. Deerfield does not have a problem with semiautomatic rifles. He questioned what will happen after the next mass shooting, after this Ordinance is passed. He questioned whether the Village would try for a ban on handguns.”

Other speakers included Deerfield high school students who said banning guns would alleviate mass shootings, with others hoping other municipalities and eventually the state would follow suit.

Below is a summary of the Board of Trustees April 2, 2018 Regular Meeting: