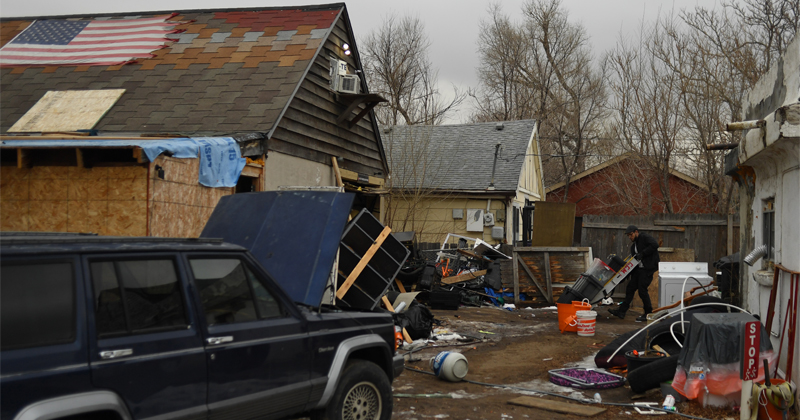 Most people remain blissfully ignorant of the economic wounds inflicted on the US economy by the government-imposed economic shutdowns in response to the coronavirus.

But every once in a while, the curtain blows back and we catch a glimpse of the damage.

A federally imposed eviction ban that shielded about one-third of renters living in buildings with federally backed mortgages recently lapsed and the $600 weekly federal unemployment benefit expired last Friday. One analyst told Reuters that without more government help, we could see “a staggering surge in homelessness, unlike anything we have seen.”

Moody’s Analytics Chief Economist Mark Zandi called the unprecedented amount of back rent “catastrophic” and told Reuters “very few people will be able to pay this back.” He said the resulting debt spiral could haunt displaced tenants “for a lifetime.”

In July alone, 21% of renters paid no rent, according to the research firm Apartment List.

It’s easy to point fingers at landlords and say they should just give renters a break and forgive the back rent. But that ignores the fact that many building owners depend on rental income to pay their mortgages. Emily Benfer co-created the COVID-19 Housing Policy Scorecard at Princeton University’s Eviction Lab. She pointed out that the surging level of back rent could lead to a domino effect that spirals through the economy.

Most pundits think the federal government should bail out everybody with more stimulus checks and extended unemployment. But that solution could ultimately be worse than the problem. At best, it merely kicks the can down the road.

The ugly truth is the US government doesn’t have any money. It is already borrowing at a torrid rate and much of it is being monetized by the Federal Reserve – in other words by printing money. This is generating record levels of inflation. Money supply growth hit a new all-time high for the third month in a row in June. The only time we’ve seen money supply growth anywhere near this level was during the inflationary years of the 1970s.

We’re already seeing the impact of dollar debasement with gold surging over $2,000 an ounce and the dollar index sinking lower. Peter Schiff has said the dollar is not just going down, it’s ultimately going to crash.

“I think the dollar is going to keep drifting down until it collapses. And this is going to usher in a real economic crisis in America, unlike something we’ve ever seen. Because it’s going to force the Fed to choose between saving the dollar, and dumping all the bonds its been buying, letting interest rates rise sharply, forcing the US government to slash spending right now and abandon all these stimulus plans, or just let inflation ravage the entire economy and wipe out a generation of Americans.”

The rising level of back-rent isn’t the only sign that the economy is in trouble. As we have reported, permanent business closures are rising, there is an increasing number of mortgage delinquencies, a rising number of over-leveraged zombie companies, and a tsunami of defaults and bankruptcies on the horizon.

And yet, most of the mainstream still seems convinced that with a little more stimulus and a coronavirus vaccine, everything will be just fine. But as we’ve said over and over, curing the coronavirus won’t cure the economy. And the government “help” is only making things worse in the long-run.