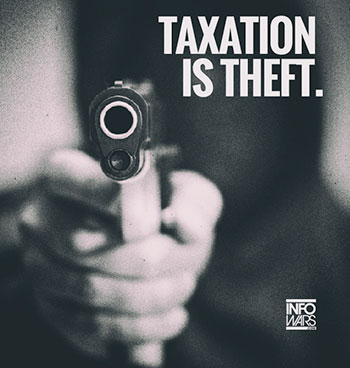 The Tax Foundation has released a report ahead of the annual federal income tax deadline next week and the results are startling.

In total Americans will fork over $3.3 trillion to the federal government this year. When state and local taxes are added to this figure, the amount is nearly $5.0 trillion, or more than a third of the nation’s income.

Remarkably, the average American will pay more in taxes than he or she spends on food, clothing and housing combined.

According to the report, it now takes 46 days for Americans to pay federal, state, and local individual income taxes. The tax imposed on payrolls adds 26 days and sales and excise taxes 15 days. Property taxes add 11 days on average and corporate income taxes nine days. The figure is rounded out by inheritance taxes, customs duties, and other taxes that require an additional seven days to pay.

Prior to the War of 1812 Americans paid taxes on distilled spirits, carriages, refined sugar, tobacco and snuff, property sold at auction, and corporate bonds. During the war the government imposed a sales tax on gold, silverware, jewelry and watches. In 1817, the government did away with the tax and returned to collecting revenue through tariffs on imported goods. Prior to the Civil War, “Congress could afford to run the federal government on tariffs alone because federal responsibilities did not include welfare programs, agricultural subsidies, or social insurance programs like Social Security or Medicare,” writes Thomas R. Eddlem.

The first income tax was imposed in 1862 during the Civil War. Compared to today’s rate, Lincoln’s income tax burden was light—an individual earning from $600 to $10,000 per year paid tax at the rate of 3% while incomes in excess of $10,000 paid a higher rate. Sales and excise taxes were added and a so-called “inheritance” tax imposed. The office of the Commissioner of Internal Revenue was established in 1862. It had the authority to assess, levy, and collect taxes through seizure of property and income and through prosecution, much like the IRS today.

Following the war, the income tax was rolled back and taxes were collected primarily on tobacco and distilled spirits. In 1894, the government attempted to revive the income tax, but the Supreme Court ruled it unconstitutional because it was not apportioned among the states as spelled out in the Constitution.

The income tax became a permanent fixture in 1913 (along with the Federal Reserve) when the 16th Amendment was adopted. At the close of the First World War in 1918, internal revenue collections passed the billion dollar mark for the first time. The figure was $7.3 billion at the start of the Second World War. In 1943, a withholding tax on wages was imposed and it increased the number of taxpayers to 60 million. Tax collections went up to $43 billion by 1945.

By 2015, the federal government collected a record $3.25 trillion in revenue, according to the Treasury Department. The receipts included tax revenue from individual income taxes, corporate income taxes, social insurance and retirement taxes, unemployment insurance taxes, excise taxes, estate and gift taxes, customs duties, and other miscellaneous items, notes Ali Meyer. Most of the revenue came from individual income taxes. Despite this huge amount of expropriated money, the federal government spent around $3.69 trillion, creating a deficit of approximately $438 billion.

Aware of the burden imposed on average Americans presidential candidate Donald Trump has proposed a revised taxation scheme that allows Americans to keep $10.4 trillion to $11.98 trillion of their money over the next decade, while Ted Cruz promises to slash $8.6 trillion from mandatory federal taxes.

Hillary Clinton claims she will force the wealthiest to pay more taxes and has vowed to shut down corporate loopholes. “On a static basis, the tax plan would lead to 0.7 percent lower after-tax income for the top 10 percent of taxpayers and 1.7 percent lower income for the top 1 percent. When accounting for reduced GDP, after-tax incomes of all taxpayers would fall by at least 0.9 percent,” explains the Tax Foundation.