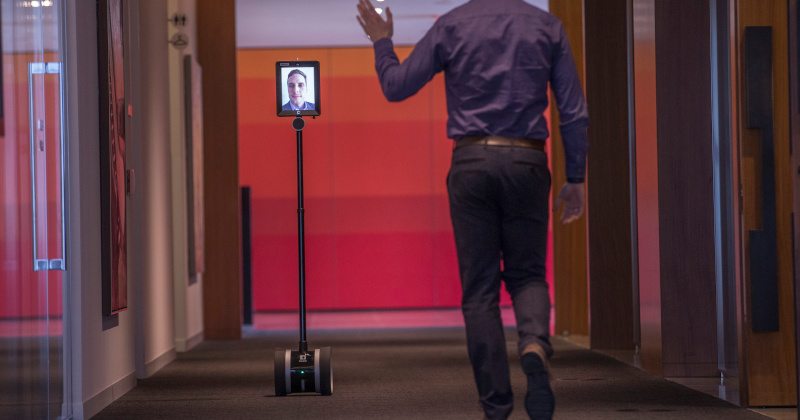 Students in Arizona will be the first known graduates in America to “walk” as robots in a virtual ceremony.

Students and faculty at Arizona State University have risen to the challenges of COVID-19 to celebrate graduation in an innovative way. The Thunderbird School of Global Management at ASU will host a virtual graduation ceremony Monday using mobile telepresence robots that will “walk” in place of the students.

ASU Thunderbird School of Global Management Media Relations Manager Jonathan Ward announced that graduates can utilize the telepresence robot so they can “walk” remotely and have the experience of being awarded a diploma by the dean.

“Equipped with tablet computers, the remotely controlled robots use live video and audio for an interactive experience in real-time, the next best thing to being there in person,” explained Ward.

The ceremony will allow graduates to take turns using remote controls so they can “walk” up to the Dean, receive their diploma, and pose for a picture. The virtual commencement is set to take place Monday. The 3-hour event will be live-streamed on Thunderbird’s YouTube channel and made available for later streaming.

In a statement to Campus Reform, Ward said that this innovative approach was brought forward by Dean Sanjeev Kagrahm.

According to ASU, “Khagram is a world-renowned expert in global leadership, the international political economy, sustainable development, and the data revolution.”

Ward emphasized to Campus Reform that the Thunderbird graduates played an integral role in this innovative approach to celebrating graduation, not just the administration. Of the 143 graduates from Thunderbird, 140 opted to participate in the virtual ceremony.

“Dean Khagram was delighted to offer this innovation as an option after the staff figured out a way to make it work. Students chose to take part on short notice and made this project their own with their high participation, unique avatar decisions and active engagement,” Ward told Campus Reform.

Ward also tells Campus Reform that the avatars created by the students only add to the experience, making it as real as possible for the ceremony to represent a traditional commencement as closely as possible.

“The robots’ avatars represent each of the students participating in graduation,” said Ward. “A group of students who would normally have been recognized on stage for their outstanding academic accomplishments in our traditional commencement ceremonies were invited to control the robots during the taping of the virtual ceremony.”

No other department at ASU has reportedly celebrated students’ accomplishments in this way. Jay Thorne, another spokesperson for Thunderbird, says that each department chair or college dean has the authority to determine where their resources go regarding commencement.

“This was a choice and an expenditure made at the discretion of the dean and the college. Each college makes its own decisions about where to invest resources and how to manage its convocation ceremony,” said Thorne.

It is unclear whether or not any other university in the United States has approached graduation celebrations using telepresence robots.

However, a Japanese university recently held a very similar ceremony.

Despite the high rate of participation and the media coverage Thunderbird has gotten over the days since announcing their version of a virtual graduation, they look forward to celebrating in a traditional way soon.

“This was a very creative response to current circumstances and we are always looking for ways to use technology to enhance the student experience, but in-person ceremonies are certainly being missed this year and we expect to return to that tradition as soon as possible,” says Thorne.