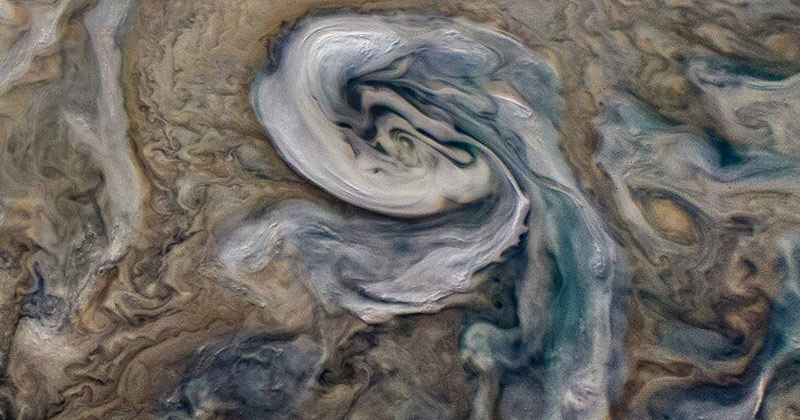 New Juno results suggest that the violent thunderstorms taking place in Jupiter’s atmosphere may form ammonia-rich hail, or ‘mushballs,’ that play a key role in the planet’s atmospheric dynamics.

This theory, developed using data from Juno’s microwave radiometer by the Juno team, is described in two publications led by a researcher at the Laboratoire Lagrange (CNRS/Observatoire de la Côte d’Azur/Université Côte d’Azur) with support from the CNES. The theory sheds light on some puzzling aspects of the meteorology of Jupiter and has implications for how giant planet atmospheres work in general. This, and related findings, are presented in a series of three articles published in the journals Nature and JGR Planets.

Water is a key substance in the meteorology of planets and is believed to play a key role in their formation. Terrestrial storms are driven by water dynamics creating lightning storms thought to be connected to regions where multiple phases of water co-exist (solid, liquid and gas). As on Earth, Jupiter’s water is moved around by thunderstorms. Those are thought to form within the planet’s deep atmosphere, around 50 km below the visible clouds, where the temperature is close to 0 degrees C. When these storms are powerful enough, they carry crystals of water-ice into the upper atmosphere.

In the first article, researchers from the US and the Laboratoire Lagrange suggest that when these crystals interact with gaseous ammonia, the ammonia acts as an anti-freeze, changing the ice to a liquid. On Jupiter as on Earth, a mixture of 2/3 water and 1/3 ammonia gas will remain liquid down to a temperature of -100 degrees C. The ice crystals which have been lofted high into Jupiter’s atmosphere are melted by ammonia gas, forming a water-ammonia liquid, and become the seeds for exotic ammonia hailstones, dubbed ‘mushballs’ by the researchers. The mushballs being heavier then fall deeper into the atmosphere until they reach a point where they evaporate. This mechanism drags ammonia and water down to deep levels in the planet’s atmosphere.

Measurements by Juno discovered that while ammonia is abundant near Jupiter’s equator, it is highly variable and generally depleted elsewhere to very deep pressures. Prior to Juno, scientists saw evidence that parts of Jupiter’s atmosphere were depleted in ammonia to relatively shallow depths, but this had never been explained. To explain Juno’s discovery of ammonia’s deep variability across most of Jupiter, the researchers developed an atmospheric mixing model that is presented in a second article. Here they show that the presence of thunderstorms and the formation of water-ammonia mushballs dry out the deep atmosphere of its ammonia and account for the variations observed by Juno as a function of latitude.

In a third article, the researchers report observations of Jovian lightning flashes by one of Juno’s cameras. The small flashes appear as bright spots on the cloud tops, with sizes proportional to their depth in Jupiter’s atmosphere. Unlike previous missions that had only observed lightning flashes from deep regions, Juno’s proximity to the planet enabled it to detect smaller, shallower flashes. These flashes come from regions where temperatures are below -66 degrees C and where water alone cannot be found in the liquid state. Yet the presence of a liquid is thought to be crucial to the lightning-generation process. Juno’s detection of “shallow lightning” storms at the altitudes where liquid ammonia–water can be created is observational support that the mushball mechanism may indeed be at work in Jupiter’s atmosphere.

Understanding the meteorology of Jupiter and of other as yet unexplored giant planets such as Uranus and Neptune should enable us to better comprehend the behavior of gas giant exoplanets outside our own Solar System.