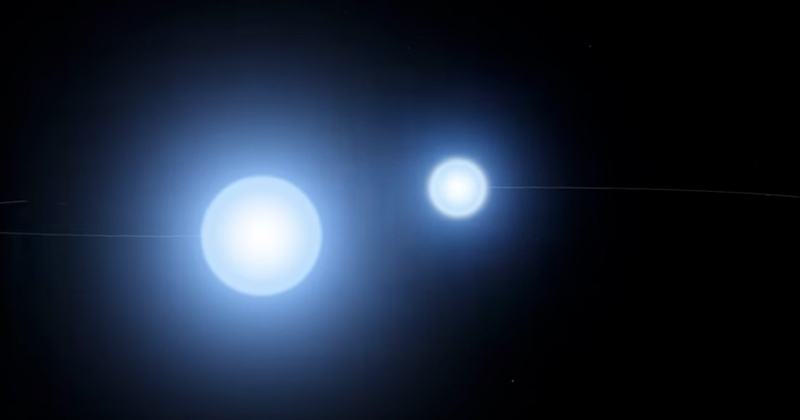 Astronomers using data from NASA’s Transiting Exoplanet Survey Satellite (TESS) have shown that Alpha Draconis, a well-studied star visible to the naked eye, and its fainter companion star regularly eclipse each other.

While astronomers previously knew this was a binary system, the mutual eclipses came as a complete surprise.

“The first question that comes to mind is ‘how did we miss this?’” said Angela Kochoska, a postdoctoral researcher at Villanova University in Pennsylvania who presented the findings at the 235th meeting of the American Astronomical Society in Honolulu on Jan. 6. “The eclipses are brief, lasting only six hours, so ground-based observations can easily miss them. And because the star is so bright, it would have quickly saturated detectors on NASA’s Kepler observatory, which would also mask the eclipses.”

The system ranks among the brightest-known eclipsing binaries where the two stars are widely separated, or detached, and only interact gravitationally. Such systems are important because astronomers can measure the masses and sizes of both stars with unrivaled accuracy.

Alpha Draconis, also known as Thuban, lies about 270 light-years away in the northern constellation Draco. Despite its “alpha” designation, it shines as Draco’s fourth-brightest star. Thuban’s fame arises from a historical role it played some 4,700 years ago, back when the earliest pyramids were being built in Egypt.

At that time, it appeared as the North Star, the one closest to the northern pole of Earth’s spin axis, the point around which all of the other stars appear to turn in their nightly motion. Today, this role is played by Polaris, a brighter star in the constellation Ursa Minor. The change happened because Earth’s spin axis performs a cyclic 26,000-year wobble, called precession, that slowly alters the sky position of the rotational pole.

TESS monitors large swaths of the sky, called sectors, for 27 days at a time. This long stare allows the satellite to track changes in stellar brightness. While NASA’s newest planet hunter mainly seeks dimmings caused by planets crossing in front of their stars, TESS data can be used to study many other phenomena as well.

A 2004 report suggested that Thuban displayed small brightness changes that cycled over about an hour, suggesting the possibility that the system’s brightest star was pulsating.

To check this, Timothy Bedding, Daniel Hey, and Simon Murphy at the University of Sydney, Australia, and Aarhus University, Denmark, turned to TESS measurements. In October, they published a paper that described the discovery of eclipses by both stars and ruling out the existence of pulsations over periods less than eight hours.

Now Kochoska is working with Hey to understand the system in greater detail.

“I’ve been collaborating with Daniel to model the eclipses and advising on how to bring together more data to better constrain our model.” Kochoska explained. “The two of us took different approaches to modeling the system, and we hope our efforts will result in its full characterization.”

As known from earlier studies, the stars orbit every 51.4 days at an average distance of about 38 million miles (61 million kilometers), slightly more than Mercury’s distance from the Sun. The current preliminary model shows that we view the system about three degrees above the stars’ orbital plane, which means neither star completely covers the other during the eclipses. The primary star is 4.3 times bigger than the Sun and has a surface temperature around 17,500 degrees Fahrenheit (9,700 C), making it 70% hotter than our Sun. Its companion, which is five times fainter, is most likely half the primary’s size and 40% hotter than the Sun.