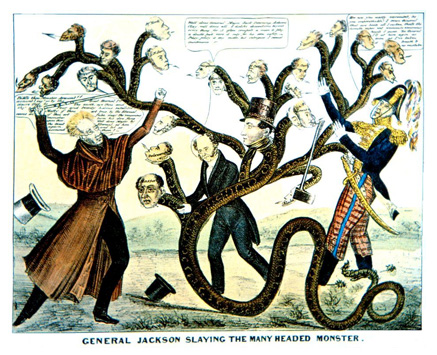 The War on Cash has many fronts.

The latest battle is for the face of the currency itself, and the central bankers, who control the front anyway, have imposed a symbolic defeat against the leaders in America’s past who have fought against the stranglehold of the money makers.

Naturally, there are liberal politics at play, fighting for every inch of ground in the war for ideological re-engineering. History is being whitewashed, various figures of antiquity rolling in their graves….

At stake is a dispute for the powers of government even better than the more famous duel between Aaron Burr and Alexander Hamilton, of whom we also speak.

But now, the money powers at the Treasury Department have decided that it is time to add a woman’s face to the money supply as well.

As such, the powers-that-bank have decided to oust Andrew Jackson from the line up, and with it, part of his legacy.

It will be “removed in favor of a female representing the struggle for racial equality,” according to CNN, while an early proposal to remove Alexander Hamilton’s bill will be scrapped, though the proposal includes a redesign on the backs of his and several other notes with scenes from the Woman’s Suffrage Movement, Susan B. and all the gals.

Treasury Secretary Jack Lew is expected to announce this week that Alexander Hamilton’s face will remain on the front of the $10 bill and a woman will replace Andrew Jackson on the face of the $20 bill, a senior government source told CNN on Saturday.

Dramatically, it seems that there was a backlash to counter the coup against Hamilton, including support from former Federal Reserve chairman Ben Bernanke:

The decision to make the historic change at the expense of Hamilton drew angry rebukes from fans of the former Treasury Secretary. The pro-Hamilton movement gained steam after the smash success of the hip-hop Broadway musical about his life this year.

Those pressures led Lew to determine that Hamilton should remain on the front of the bill.

And there’s a reason for Bernanke’s bias towards Hamilton.

Here’s the scoop from the Economic Policy Journal, who called it a “despicable decision”:

It was Hamilton, who from the early days of the nation clamored for a central bank and a strong interventionist federal government.

I have quoted Thomas DiLorenzo on the evil Hamilton before:

Hamilton was a compulsive statist who wanted to bring the corrupt British mercantilist system — the very system the American Revolution was fought to escape from — to America. He fought fiercely for his program of corporate welfare, protectionist tariffs, public debt, pervasive taxation, and a central bank run by politicians and their appointees out of the nation’s capital….

The Philadelphie Federal Reserve publication. A History of Central Banking in America, reports:

Alexander Hamilton, the first Secretary of the Treasury, urged Congress to also assume the war debts of the individual states and then create a national bank to help refinance all these debts. Hamilton’s proposal faced major opposition. Critics said that Hamilton’s bank was unconstitutional, would be a monopoly, and would reduce the power of the states. Although Hamilton won, the bank’s charter was limited to 20 years.

And that’s right where Andrew Jackson’s legacy with the banks picks up.

“You are a den of vipers and thieves. I intend to rout you out, and by the eternal God, I will rout you out.” (Andrew Jackson, to a delegation of bankers discussing the recharter of the Second Bank of the United States, 1832)

President Jackson likened their agents to the hydra-beast, with its many heads, and even survived an assassination attempt, by staving off an attacker personally.

The bankers, and the powerful families including the Rothschilds who supported it, wanted a “national bank” because they could load the board with “their” guys and outweigh the will of the people and the normal channels of government. 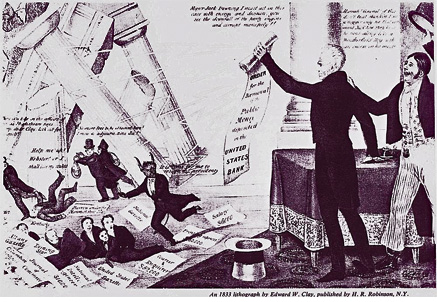 Of course, the same exact state of affairs has been going on today for more than a century with the Federal Reserve, which is run by the successors to the same exact banking interests, including the still immensely-powerful Rothschild family.

The struggle is depicted well in “The Money Masters,” which spans several centuries of history with the threat of banking powers over individual sovereignty in stark contrast. To be sure, there is an important and nefarious plot afoot to ensnare you, your family and everyone on the block with debt.

There is a line, and you should figure out what side of it you’re going to be on.

Jackson narrowly succeeded in staving off banker domination of the U.S. during his day.

Of course, Andrew Jackson, who was the United States’ seventh president, was also a complete controversy his entire lifetime. It is no surprise that the same people who took down the Confederate flag from the South on the back of a mass shooting tragedy are now trying to tear down the image of a particularly controversial and intriguing figure from the American past.

Jackson was a recalcitrant and unyielding general and war hero, and later an outsider riding a wave of populist support into the White House, bringing in sometimes unscrupulous companions, and plenty of Masons. Many of his backers were diametrically opposed to the entrenched power of New York bankers and speculators, as well as patrician politicians who dominated the first phase of politics in the nation’s history. Jackson played a nasty role in the Trail of Tears affairs with Indians, too, and with the South and Western expansion of slave-friendly territories. Many shades of grey.

Meanwhile, behind the scenes in the founding days of this country, Alexander Hamilton, an advocate of strong central government, and maneuvered on behalf of his banker masters to collectivize the war debt from the states and create a central bank to control the financial strength of the country, and ingrain the early United States with the mindset of the British masters they had just fought to shake off.

After the creation of the Federal Reserve in 1913, and the crisis and consolidation of wealth during the Great Depression, and ever since the 2008 economic collapse, the rule by bankers has become a foregone conclusion, though there will be more chances to shake off their yoke of control. (BitCoin is one possible avenue; Congressionally-controlled greenbacks another; gold and silver yet another…)

Erasing Andrew Jackson from the faces of the fiat funny-money that is passed around by an increasingly ignorant and dependent society (which itself has adopted digital currency as the new norm) will further cut off the past from the masses, and ensure their enslavement.