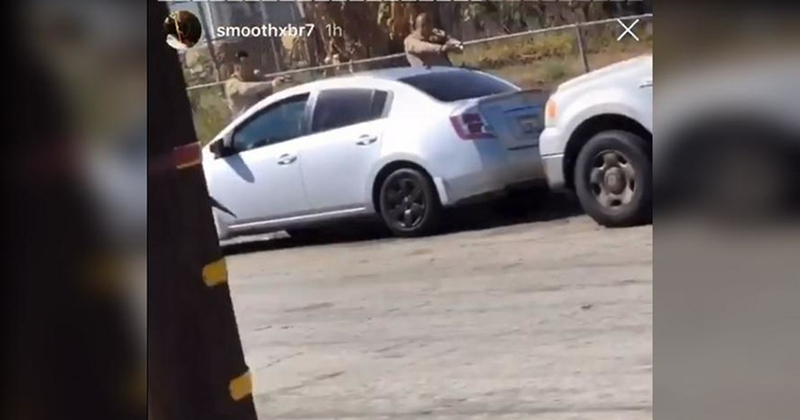 BLM demonstrators flocked to a site in South Los Angeles where a black man was shot and killed by deputies of the LA County Sheriff’s Department.

The man was filmed running from the officers and reportedly had a gun on him.

The shooting happened on Monday after midday in the area of Budlong Avenue and 109th Place. According to the Sheriff’s Department, deputies were driving in a patrol car when they saw the man riding a bicycle, and decided to pull him over for a traffic violation. He left the bike and tried to run away.

When the deputies caught up with him, he fought back and punched one of them in the face. At that moment they spotted a handgun among some clothing items that the man had been carrying and dropped on the ground during the fight. It was not immediately clear if he tried to reach for the weapon before the deputies shot him, the department said in a statement to the media.

The confrontation was filmed on a phone by an eyewitness, though the footage available on social media doesn’t include the moment of the shooting itself.

The series of short clips first shows a black man who appears to be in his 30s, running in the street. It then goes to a moment after the shooting, showing two police officers with their handguns drawn and the shooting victim lying motionlessly. Witnesses are heard screaming while the cameraman says: “They shot [him] like 20 times.”

The angry crowd of eyewitnesses grew in size over the following hours as additional protesters gathered at the scene. By Monday evening, hundreds of demonstrators convened, answering a call by local Black Lives Matter organizers. The protest remained peaceful.

“How many more times do we have to gather out here, mourning the loss of our brothers and sisters,” one protester told CBS LA.

The shooting is being investigated by the District Attorney’s Office, the coroner’s office and the sheriff’s own Internal Affairs Bureau and inspector general.