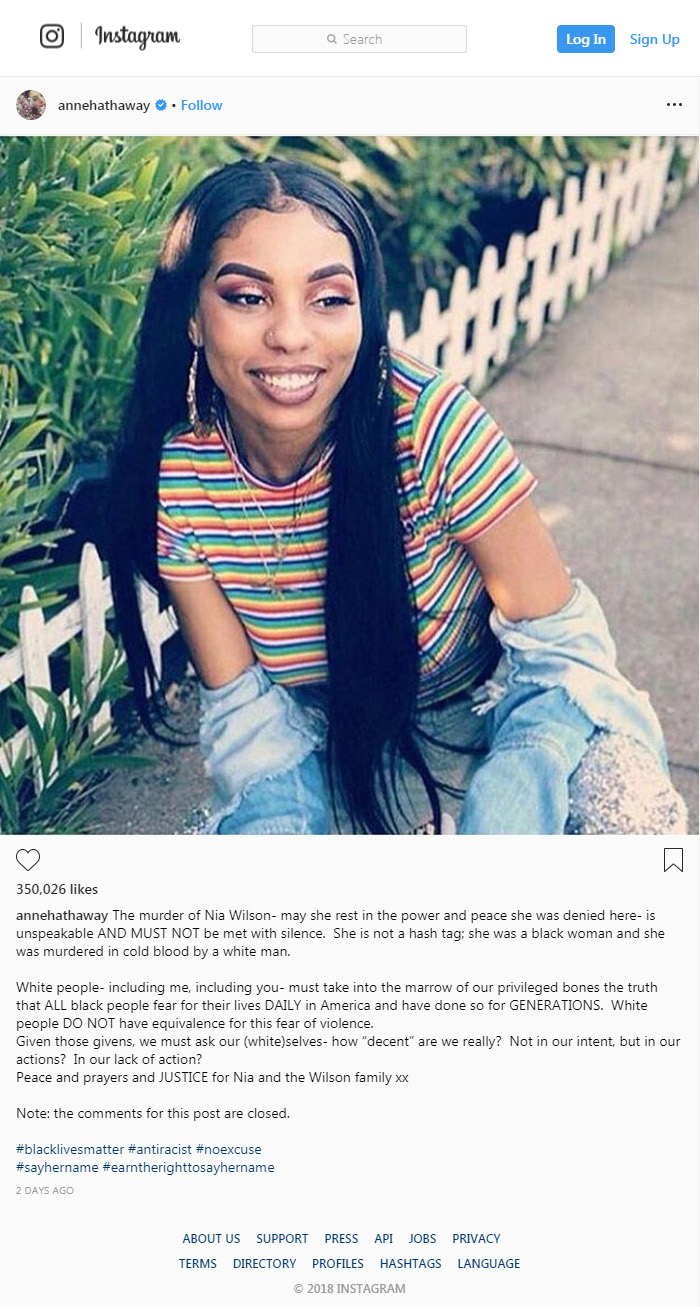 According to actress Anne Hathaway, “all black people” live in constant fear in America because white people could kill them at any moment.

“Privileged” white people “DO NOT have equivalence for this fear of violence,” Hathaway says.

The murder of Nia Wilson- may she rest in the power and peace she was denied here- is unspeakable AND MUST NOT be met with silence. She is not a hash tag; she was a black woman and she was murdered in cold blood by a white man.

White people- including me, including you- must take into the marrow of our privileged bones the truth that ALL black people fear for their lives DAILY in America and have done so for GENERATIONS. White people DO NOT have equivalence for this fear of violence.

Given those givens, we must ask our (white)selves- how “decent” are we really? Not in our intent, but in our actions? In our lack of action?

Wilson’s suspected killer, John Lee Cowell, is a mentally ill, schizophrenic, bipolar, homeless drug addict with a long criminal record who was only on the streets because the liberal s***hole of San Francisco stopped punishing criminals for crimes long ago to “fight systemic racism.”

Despite “prior arrests that include assault with a deadly weapon,” Cowell “was released from state prison in May, just 75 days after completing a sentence for second-degree robbery,” AJC reports.

“Investigators said they have found no evidence of racial motivation,” AJC reports.

Just to give people an idea of the type of violence happening regularly at BART stations — which the national media completely ignores — the BART Board of Directors moved last year to withhold videos of crimes committed on their trains to “avoid racist stereotyping of suspects.”

“To release these videos would create a high level of racially insensitive commentary toward the district,” BART Board of Directors member Debora Allen said. “And in addition it would create a racial bias in the riders against minorities on the trains.”

Though the media praised Hathaway’s delusional statement, she was mocked on social media by black conservatives:

WTH does #AnnHathaway think I do every day? Does she picture me weeping & shaking b/f I leave the house every morning? My God…the stench of #WhiteSavior complex is overwhelming. Hey Ann, I have news for you…Black people can have NORMAL LIVES TOO. https://t.co/5NOGeycqoF

This goof says "ALL BLACKS FEAR FOR THEIR LIVES DAILY". I didn't drink that KOOL-AID when the cup was passed around. I FEAR the Democrat Party and their liberal policy that destroyed the black family and Planned Parenthood who murders black babies. https://t.co/wyeyLyDczr