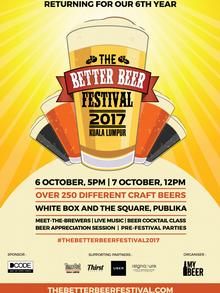 An annual craft beer festival held in Malaysia has been canceled following protests from Islamists and security concerns.

Officials in Malaysia on Monday announced the cancellation of the sixth annual Better Beer Festival, set to take place in Kuala Lumpur the first week of October, citing complaints from the Pan-Malaysian Islamic party (PAS).

Organizers of the event, MyBeer, say the Kuala Lumpur City Hall (DBKL) rejected their application for a permit over the festival’s “political sensitivity.”

“At our meeting with DBKL officials, we were instructed to cancel our event as there are issues with the licensing,” a statement from MyBeer said. “We were further informed that the decision was made due to the political sensitivity surrounding the event.”

Earlier this month, PAS central committee member Riduan Mohd Nor stated police would not be able to ensure “that such events would not lead to criminal acts, rape and free sex,” reports Reuters.

Nor additionally condemned the festival saying it would turn the Malaysian capital into “the largest vice center in Asia.”

“It is something that is shameful for an Islamic country like Malaysia,” Nor stated, according to The Telegraph.

A campaign on Facebook was also reportedly launched opposing the festival.

While there are laws in Malaysia prohibiting Muslims from consuming alcohol, Islamic code also forbids Islamic followers from imbibing spirits, ales or lagers, while non-Muslims such as Indonesian and Chinese minorities are unaffected.

The festival, which would have taken place from October 6-7, was expected to draw some 6,000 participants, and would have featured over 250 craft beers from 43 independent brewers spanning 12 countries. “Its initial gathering, in 2012, drew only 200 people,” reports Newsweek.

“The Better Beer Festival 2017 will be the BIGGEST CELEBRATION OF THE CRAFT BEER REVOLUTION IN MALAYSIA with a huge range of small-batch beers, festival food, and a rocking live music lineup,” organizers wrote on Facebook.

The Telegraph notes the cancellation of the beer festival is the “latest sign of creeping conservatism in Malaysia, where about 60% of more than 30 million inhabitants are Muslim.”

“The country practises a moderate version of Sunni Islam, but in recent years has seen a rise of vocal Islamist groups that has led to fears of an erosion in tolerance towards minorities,” writes The Telegraph’s Nicola Smith.