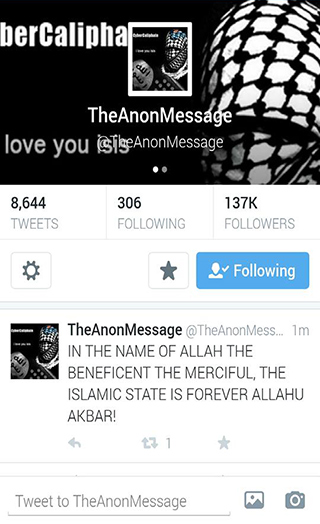 UPDATE: Anonymous has released the name of a hacker thought to be involved with Monday’s ISIS CENTCOM hack. Although some tech experts have questioned the validity of the page and the hackers alleged link to ISIS, the Anon Message Twitter account claims to have discovered a connection.

BREAKING— #CyberCaliphate's Identity (One we know of): NAME: Junaid Hussein Age: 20 Background Check: 6 months in jail for prior hacking.

The alleged hacker appears to be the same jihadist who made headlines in 2014 after heading to Syria from Birmingham.

Hussein was arrested in 2012 for hacking and posting personal information online from Tony Blair.

In response to the discovery, Anonymous also released a statement on a new operation targeting anyone involved with the Cyber Caliphate.

Citizens of the World, We are Anonymous. In light of the recent cyber attacks led by members of ISIS, we have extended our declaration of war to include any and all supporters of the terror group including the CyberCaliphate splinter group who have recently been able to infiltrate one of the US Central Command servers and leaked sensitive information that may likely be used by countries of terrorist origin (North Korea). Although we insist to maintain our distance from any support towards the actions of the United States government, we truly condemn any actions taken by those who associate themselves with ISIS and continue to wreak havoc across the Internet. We are anonymous. We are legion.

The Anonymous account had been allegedly compromised the prior evening.

Anonymous was able to reestablish control over the account in less than five minutes, reportedly discovering the exact location of the “Cyber Caliphate” hacker in the process.

Followers of the account immediately noted the group’s quick response time, pointing out the fact that CENTCOM, a group responsible for U.S. security interests in 20 nations, took several hours to appear back online.

The original CENTCOM hack made headlines after the alleged ISIS supporter issued threats against a multitude of groups while linking to a page which appeared to list personal information on US military personnel.

Many questioned the timing of the high-profile incident given the fact that President Obama was delivering an address on cybersecurity at nearly the exact moment.

U.S. officials will undoubtedly use the case to promote increased Internet regulation as the notorious CISPA cybersecurity bill heads back to Congress.