Update: New footage shows the man with the megaphone and MAGA hat getting into an altercation with other Trump supporters just before an anti-Trump man snatched his hat off his head and threw it to the ground. The man picked up his MAGA hat, stood there and was then jumped by the hat thief and another man.

After a major brawl at President Trump’s Hollywood Walk of Fame star made headlines last week, another fight broke out at the location Sunday.

People have gathered around the Trump star ever since a man destroyed it with a pickaxe on Wednesday, July 25.

The crowd is made up of Trump supporters and haters, creating a hostile environment where violent liberals have once again attacked conservatives without provocation.

The latest scuffle occurred when a man holding a megaphone had his MAGA hat ripped off his head by an anti-Trumper.

A witness interviewed by KCAL 9 said, “He came up and was like ‘I’m gonna pull his hat off’ and I was like ‘Ugh’ and then he went and pulled the Make America Great hat off and then after that everything just went crazy, they started fighting.”

Another witness shared details on how the fight started, adding, “The kid’s father came in and said ‘Hey that’s my son, don’t be going after my son,’ got up in his face, started pushing him and the guy with the megaphone headbutted him.”

After the fight, police ended up struggling with the two anti-Trump men when one of them attacked officers who were trying to detain his friend.

Watch another angle below:

The previous fight, taking place on Thursday, July 26, started after a Trump protester said, “Nigger,” and got in the face of Trump supporters, shouting, “Fuck you. What you gonna do.”

During the verbal confrontation one of the Trump protesters threw the first punch at a pro-Trump Marine and sparked an all-out brawl.

[INSANE VIDEO]: Fight breaks out at Donald Trump’s star on Hollywood Boulevard. All because @ElijahSchaffer was wearing a Trump jersey and USA hat.

Be safe out there. The intolerance is real! pic.twitter.com/eGk6pYKiti

In October of 2016, a homeless woman was attacked for defending the Trump star after a man destroyed it with a sledgehammer.

Below is footage of the star being destroyed:

As political tensions rise, Trump’s Hollywood star looks to serve as a location for angry leftists to assault conservatives.

It’d be a shame if this guy showed up…

The man who destroyed the star speaks out in this exclusive Infowars interview. 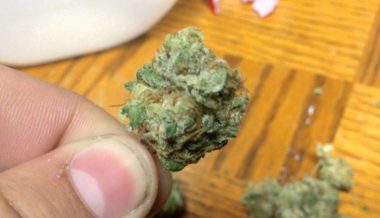