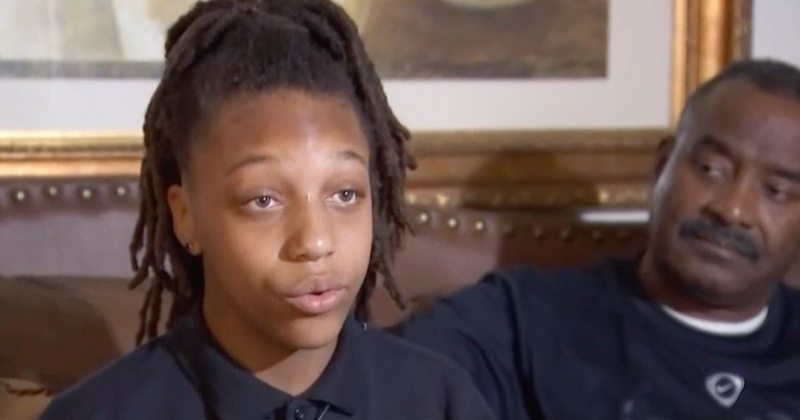 A student at a private middle school in Virginia claimed she was targeted for harassment last week by white students who yelled racial slurs and cut her hair.

On Monday, she admitted all those allegations were false.

Police confirmed an investigation was underway last Friday after Amari Allen, 12, told local media that three white boys at the Immanuel Christian School, where Vice President Mike Pence’s wife teaches, pinned her down and assaulted her, calling her “nappy,” and “ugly,” while they covered her mouth and used scissors to snip her dreadlocks.

Three sixth-grade boys at a Christian school in Northern Virginia pinned down a black classmate and cut off some of her dreadlocks while telling her her hair was “nappy” and “ugly,” she told News4.

“They said my hair was nappy and I was ugly,” she said.

On Monday, however, Allen’s legal guardians met with school officials before releasing a statement apologizing to the students blamed and saying the whole event was fabricated.

“To those young boys and their parents, we sincerely apologize for the pain and anxiety these allegations have caused,” reads a statement by Allen’s grandparents sent to The Washington Post.

“To the administrators and families of Immanuel Christian School, we are sorry for the damage this incident has done to trust within the school family and the undue scorn it has brought to the school. To the broader community, who rallied in such passionate support for our daughter, we apologize for betraying your trust.”

“We understand there will be consequences and we’re prepared to take responsibility for them,” they added. “We know that it will take time to heal, and we hope and pray that the boys, their families, the school and the broader community will be able to forgive us in time.”

Immanuel Christian School Principal Stephen Danish also released a statement confirming the hoax and sympathizing with the “victims and the hurt on both sides of this conflict.”

“We can now confirm that the student who accused three of her classmates of assault has acknowledged that the allegations were false. We’re grateful to the Fairfax County Police Department for their diligent work to investigate these allegations,” Danish wrote.

“While we are relieved to hear the truth and bring the events of the past few days to a close, we also feel tremendous pain for the victims and the hurt on both sides of this conflict. We recognize that we now enter what will be a long season of healing.”

The event was bought hook, line and sinker by the lapdog media which has increasingly green-lighted hate hoaxes in the Trump era, and is reminiscent of the hoax perpetrated by actor Jussie Smollett in Chicago earlier this year, in which he claimed he was assaulted by two white Trump supporters who put a noose around his neck and yelled “MAGA country” while he tried to grab a Subway sandwich in below-freezing Chicago temperatures.

With Jussie Smollett’s slap on the wrist, leftists have been given the green light to stage attacks as many times as they want with almost no repercussions until one sticks.