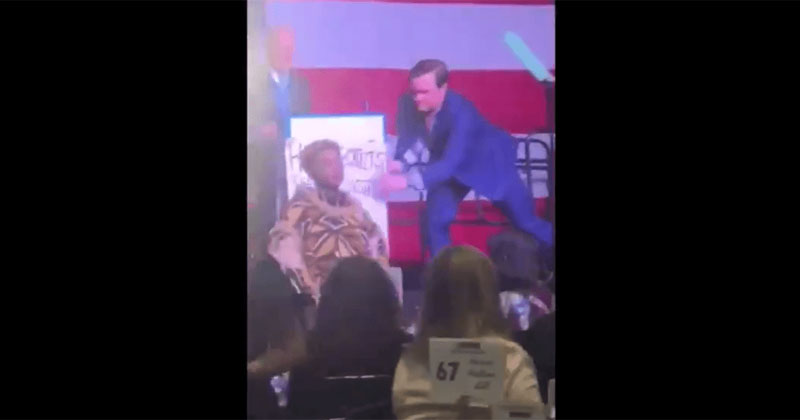 Bloomberg is experiencing backlash for his attempt to purchase the Democrat nomination by buying up campaign field workers and sponsored social media posts, and also for his view that minorities should be specially targeted by police, which he actualized during his three terms as mayor of New York City.

The protesters agitated against Bloomberg both outside the gala and also inside the event.

“Virginia is not for sale!!”

Dozens of protesters have a message for @MikeBloomberg outside Main Street Station in Richmond ahead of the Democratic Party of Virginia’s Blue Commonwealth Gala. pic.twitter.com/mNUJdQIctv

"He protects racist systems. Will you?"@jasmarlee protests Bloomberg at the Virginia Democratic Party Gala. No justice, no peace. pic.twitter.com/xXNchz5FCC

President Trump branded Bloomberg a “total racist,” referring to an audiotape of Bloomberg defending Stop and Frisk because Bloomberg believes that young men of color are most likely to commit crimes. Trump agreed with Democrat New York Rep. Alexandria Ocasio-Cortez, who threw shade on Bloomberg’s apology, stating, “Will people get their records expunged? Will young people sucked into the spiderweb of incarceration get their lives back? Unless there is restorative justice, there is no ‘moving on’ from Stop & Frisk. It’s just a billionaire trying to cover up authoritarian & racist policy,”

“It’s exactly the reverse of what they say. All right. I don’t know where they went to school, but they certainly didn’t take a math course. Or a logic course!,” said Bloomberg.

Dead Energy Bloomberg, his meme machine and all of his history of racial profiling are now adding speculation that the Former NYC Mayor is considering bringing in wicked Hillary Clinton as his running mate according to the Drudge Report.