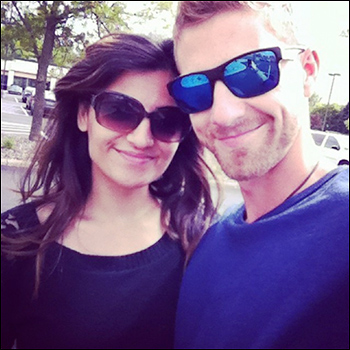 An independent filmmaker and his family were found dead in a Minnesota home over the weekend from what media outlets are describing as an “apparent murder suicide.”

On Saturday, a neighbor alerted authorities after seeing the lifeless bodies of 29-year-old writer, film producer and Army veteran David Crowley, his wife Komel, 28, and their 5-year-old daughter, Rani, laying inside their Apple Valley home.

Neighbor Collin Prochnow was investigating why packages had been sitting on the family’s doorstep for weeks. Prochnow says that after ringing the doorbell he peered through the window and “saw three bodies on the ground with a black handgun next to them,” according to KARE11.

It’s uncertain how long the bodies had been there, but neighbors suspect they died sometime over the Christmas holiday.

Numerous law enforcement agencies are investigating the causes of death, but police have yet to release a statement. They are reportedly treating the death as “suspicious,” notes the Daily Mail.

“Crowley served a tour of duty in Iraq during his five-year stint in the Army and met Komel while stationed in Texas,” reports New York Daily News.

Neighbors say they hadn’t taken notice of the family’s absence, but say they’d previously seen Crowley in his yard playing with his daughter.

Though scant details have been made public, reports are already suggesting Crowley may be responsible due to a recent short haircut, recent pictures uploaded to social media and because he “started wearing fatigues” according to the Star Tribune.

One of the actors appearing in a trailer for Gray State, Charles Hubbell, told Pioneer Press Crowley seemed level-headed and destined to succeed.

“He seemed more grounded and focused than would lend itself to anything chaotic,” Hubbell described. “The entire time I worked with him there was nothing aggressive or chaotic or strange or abnormal. He was one of the ones I was hanging my hat on, one who was going to succeed.”

The film’s Indiegogo campaign met its finance goal in October 2012, raising $61,332 that would go towards “pre-production needs.”

Crowley had also been working on a non-fiction film entitled Gray State: The Rise, “a documentary extolling the beauty of liberty over oppression, slavery, and tyranny,” according to the film’s Facebook page. A message appearing on the page yesterday lamented its director’s loss: 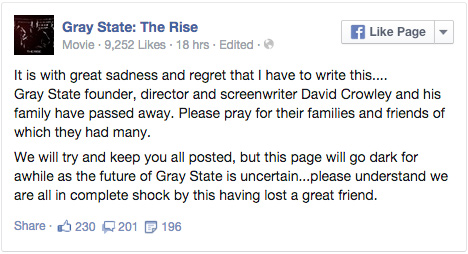 “Going back to the nature of resistance, resistance is victory. That is a statement that the Gray State does a very good job of describing,” Crowley told Alex. “Even though you may be killed resisting, the act of resistance on a metaphysical level has value…”