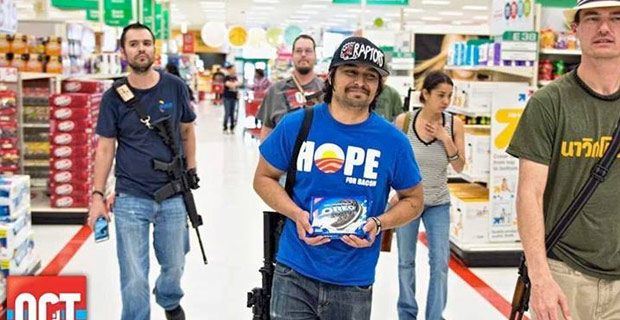 Were a mass shooting to break out inside a shopping venue, common sense dictates a person with a firearm would have good chances of subduing the assailant, but one gun control group oddly insists shoppers be defenseless, disarmed slaves.

Moms Demand Action for Gun Sense in America, the anti-gun group which recently merged with Michael Bloomberg’s now-defunct Mayors Against Illegal Guns organization, has set Target stores in their sights, launching a petition attempting to get the retail chain to ban the open-carry of firearms.

“It’s often legal to do this, because many states have weak laws that allow people to openly carry around loaded weapons without any permits, training, or background checks,” the group’s petition states, oblivious of the meaning of the term, “shall not be infringed.”

The freakout reaction stemmed from seeing photos of open-carry proponents shopping at a Target on Open Carry Texas’ Facebook account:

Though the photos were months old, the group’s success at getting various businesses to denounce the Second Amendment, in addition to an NRA editor recently referring to open-carry proponents as “weird” and “scary,” has emboldened the group to have a go at Target, eager to make discount shoppers the victims of the next gun-free zone. Forbes also highlights a recent incident in which a Target employee found a loaded gun in the toy aisle, though Moms Demand Action has not yet exploited the incident.

“..[I]t’s up to companies themselves to protect their customers when the law won’t,” the group says, attempting to paint open-carry supporters as violent criminals. “We’re asking Target to immediately end open carry in its stores.”

“They are trolling into our months-old photo archives to create a controversy over a non-issue in an attempt to smear our organization,” Grisham said. “Open Carry Texas long ago ceased carrying rifles into businesses, but Moms Demand Action crave attention and thrive on controversy by engaging in bully politics against corporations to spread their gun hate.”

Wary of alienating a portion of their patrons, Target has for the moment stood firm, refusing to make rash, emotional decisions in response to such overtly propagandistic efforts. “Target does not sell firearms or ammunition and, as it relates to this issue, we follow all state and federal laws,” the company said in a statement.

Target may not be the most ideal place to shop, but its respect thus far for the Second Amendment is commendable.