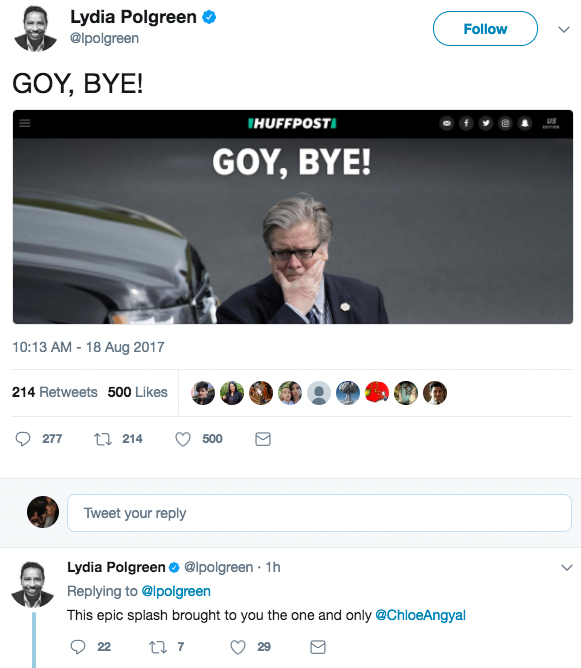 Editors at the Huffington Post were accused of spreading anti-Semitic hate Friday after blasting a headline featuring an offensive racial slur in reference to Steve Bannon’s departure from the White House.

The website proclaimed, “GOY, BYE,” in a bold headline featured prominently on its splash page after news that White House Chief Strategist Steve Bannon was out.

Editor Lydia Polgreen tweeted a screenshot of HuffPo’s front page, crediting editor Chloe Angyal for coming up with the idea.

“Goy,” or goyim, is defined by the Oxford Dictionary as an informal, derogatory Jewish name for a non-Jew.

Numerous Twitter users took offense to the leftist media outlet’s use of the term, especially in light of the nation’s current racial tensions.

I'm afraid to think of what headline the Huffington Post would choose if Dr. Ben Carson ever left the Trump administration.

After accusing Trump of being anti-Semitic, HuffPo decides to show everyone just what they think of Jews eh? How utterly disgusting.

In the past HuffPo has exploited only their journalists who were Jewish. Now it's exploiting all Jews. Fucking hacks.

Wow…that isn't anti-Semitic at all. Who is the Nazi?

Isn't this incredibly anti Semitic? Also doesn't make sense, Breitbart has lots of Jews working for it. Milo worked for it, he's Jewish.

Chloe, if a Jew in Trump's admin – Kushner, Cohn, Mnuchin, anyone – had been fired, would your headline have been "KIKE, BYE"?

How did this happen? Who thought it was a good idea?

You've managed to offend Jewish people more than anybody else. Revoke this and apologise. This is not okay.

You did NOT just use that headline, @HuffPost! What the HELL were you thinking?

This title is blatantly antisemitic & furthers age old stereotypes about Jews that have fueled countless pogroms. Goebbels used it a lot too

Some users also asked the Anti-Defamation League if they would condemn HuffPo’s use of the slur, before ADL CEO Jonathan Greenblatt thanked them for changing the headline.

@ADL_National I know you've had a very busy and trying week BUT this needs to be addressed before Shabbat.

Glad you changed the headline.Not sure your intent, but strikes me as poor taste at best, very offensive at worst.

At 10:17AM Polgreen stated she was “Looking forward” to the foreseeable controversy the tweet would stir, but by 12:15PM the editor appears to have realized the headline was in bad taste and issued clarifying statements justifying use of the slur as “edgy” and “playful.”

HuffPost splash headlines have always been edgy and playful, featuring puns and references to popular culture./

Today’s splash was intended to be a mashup tribute to Yiddish and Beyoncé. Any other interpretation was completely unintended.