“An Alternative Identity When in Public”

The U.S. government is spending billions of dollars to ensure that they can monitor and track every single activity in which you engage, be it online of off. The latest attempt to infringe on the personal anonymity comes in the form of what has been referred to as Real I.D., essentially a social security number for the internet which would be used to follow your every move in cyberspace. Coupled with technologies that include email mining, global positioning systems, predictive behavioral analysis, drones over America, and even eavesdropping via microphones on our cell phones, the ultimate goal is a surveillance state so expansive that Adolf Hitler and Josef Stalin would be jealous.

But just as quickly as government introduces the technologies that are supposed to keep us safe from terrorists and ourselves, enterprising rebels across the country are working to counter them.

In the realm of biometrics, where literally hundreds of thousands of cameras now watch our every move and plug in directly to data mining Fusion Centers where our activities are analyzed, aggregated and dispatched according to our perceived threat, some might think the system itself has become unbeatable.

Short of plastic surgery, how can we modify our faces to disappear from prying government eyes when we step out of our front doors?

If Leo Selvaggio has his way, you’ll be able to assume an alternative identity by using an age old low-tech strategy made possible by modern-day 3-D printers.

It’s so simple that it’s brilliant, especially considering the fact that Selvaggio’s innovation is capable of compromising multi-billion dollar face recognition surveillance systems with the use of an easily obtainable personal prosthetic mask. 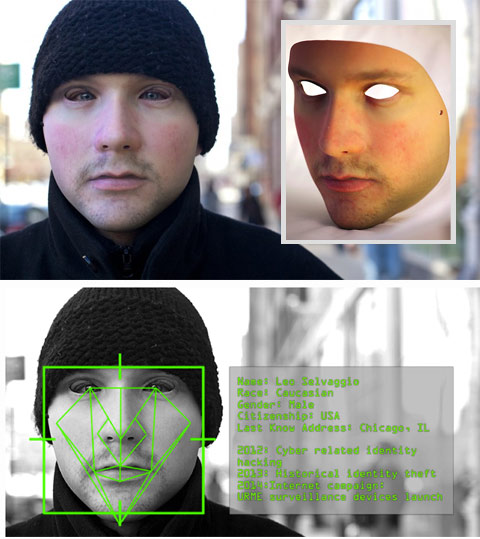 His rubber mask aimed at foiling surveillance cameras features his visage, and if he has his way, plenty of people will be sporting the Personal Surveillance Identity Prosthetic in public. It’s one of three products made by the Chicago-based artist’s URME Surveillance, a venture dedicated to “protecting the public from surveillance and creating a safe space to explore our digital identities.”

“Our world is becoming increasingly surveilled. For example, Chicago has over 25,000 cameras networked to a single facial recognition hub,” reads the URME (pronounced U R Me) site. “We don’t believe you should be tracked just because you want to walk outside and you shouldn’t have to hide either. Instead, use one of our products to present an alternative identity when in public.”

The 3D-printed resin mask, made from a 3D scan of Selvaggio’s face and manufactured by ThatsMyFace.com, renders his features and skin tone with surprising realism, though the eyes peeping out from the eye holes do lend a certain creepiness to the look.

“When you wear these devices the cameras will track me instead of you and your actions in public space will be attributed as mine because it will be me the cameras see,” the artist, who’s working toward his MFA at Chicago’s Columbia College, says on a recently launched Indiegogo page for the products. “All URME devices have been tested for facial recognition and each properly identifies the wearer of me on Facebook, which has some of the most sophisticated facial recognition software around.”

The anti-face recognition tech is currently only available in Leo Selvaggio’s image, so government systems spotting anyone wearing the mask will flag him as the culprit. But the implications are so broad that somewhere inside the Department of Homeland Security surveillance personnel are undoubtedly scrambling to thwart it, because it presents a serious hiccough to the surveillance state.

With the ease of 3-D printing any technophobe with the ability to mimic someone else’s face via 3D graphing software will have the ability to literally assume a person’s identity by simply printing their face and wearing it.

In a the world of biometric surveillance, that means anybody can disappear from view and essentially become a 21st century Silence Dogood.

Real ID? How about Alternative ID instead?