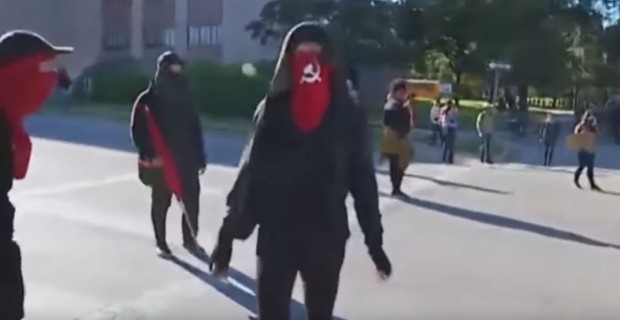 Anti-Trump communist protesters in Austin were caught on camera chanting in favor of cop killings despite a nationwide spate of police officers being murdered.

With some of them dressed in hammer and sickle face masks, the agitators shouted “FTP! F**k the police” as they marched down the sidewalk, while others stuck middle fingers up at cops in nearby vehicles.

As we have previously documented, communist groups in Austin are particularly vile, with one such outfit, the Red Guards, having previously been caught on camera attacking a pro-life protest while announcing their love for Satan and killing babies.

The chant is particularly disgusting given that there have been a number of shootings of police officers across America over the last week.

Law enforcement officials are warning of an “alarming spike in ambush-style attacks” after five cops were shot in the space of just three days.

President-elect Donald Trump personally called to offer his condolences to the family of a detective in San Antonio who was killed on Sunday morning while issuing a traffic citation.

Leftist demonstrators chanting in favor of dead cops is a common theme, especially amongst ‘Black Lives Matter’ activists – the spiritual guru behind which is herself a convicted cop killer.

During a BLM demonstration in New York, protesters chanted, “What do we want? Dead cops. When do we want it? Now!”