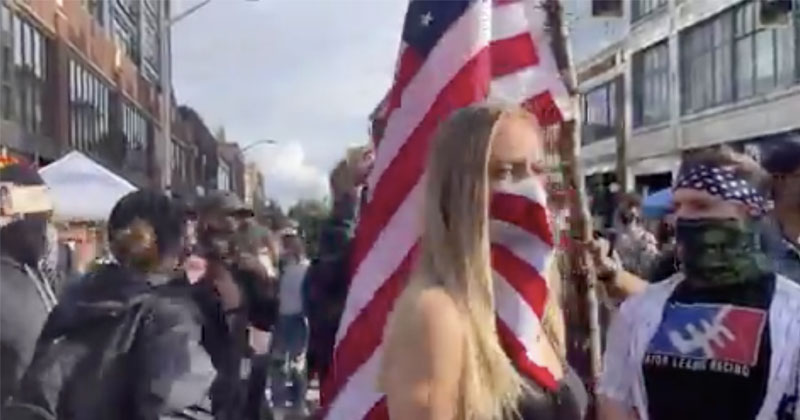 A group of people carrying American flags were attacked by Antifa after entering the so-called Capitol Hill Autonomous Zone (CHAZ) on Saturday.

The flag-carrying group were met with hostility as they entered the zone, with some leftists telling them to “go home” and that they were not welcome within the zone. Some warned other CHAZ residents to not give them attention.

People with American flags are about to enter the CHAZ/CHOP and are not receiving a warm welcome. pic.twitter.com/MczQqWodUR

After one of the flag-bearers called CHAZ a “communist hellhole,” the residents took offense and the somewhat peaceful situation began to deteriorate.

The crowd took offense when one of the American flag people called the CHAZ/CHOP a “communist hellhole.” Some in the crowd told the others to not give them attention. One black man said it was wrong for the pro-CHAZ white people to tell them what to do. pic.twitter.com/ex5Q4xe2B2

An Antifa soon ran up and stole an American flag one of the women was holding as they were approaching the Seattle Police Department’s East Precinct building.

At that point, the group decided to turn around for their safety.

One Antifa is heard saying: “They’re white supremacists. They don’t deserve to talk.”

Another CHAZ resident asks him how a black man simply holding an American flag makes him a white supremacist, illustrating a lack of ideological consensus among the CHAZ society.

As the flag-wavers were leaving, Antifa poured a cup of unknown liquid on the them and unsuccessfully tried to steal another flag.

The crowd tried to steal the last American flag but were unable to take it away. pic.twitter.com/e9uTl01Ges

Contrary to Seattle Mayor Jenny Durkan’s comments about the Antifa occupation of downtown Seattle being a “block party atmosphere” and a “summer of love,” footage on the ground shows the society is violent and hostile to outsiders with viewpoints that aren’t far-left.

Antifa created their own country in downtown Seattle, and things aren’t going so well.