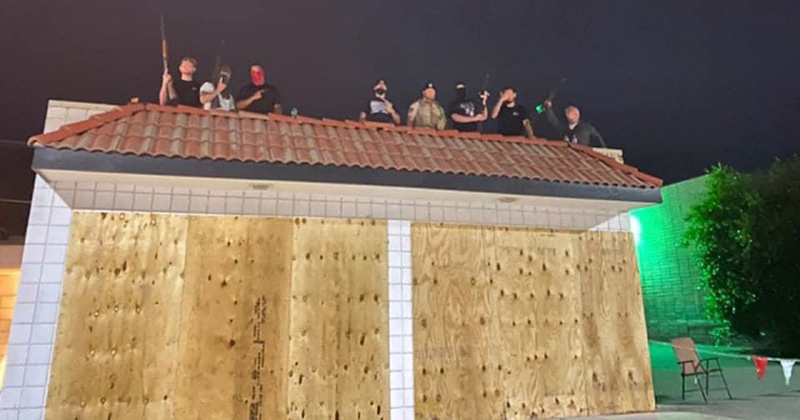 Antifa reportedly tried to invade the suburbs in Yucaipa, California, on Tuesday but the situation went south for them real quick after being confronted by locals.

This video went viral on Tuesday:

When Antifa messes with the suburbs. Best thing I’ve ever seen. pic.twitter.com/zK6MkhdemV

Here in my hometown of Yucaipa Ca we deal with our own! Armed and posted protecting our city. Antifa was ran out of town as quickly as they came in. pic.twitter.com/xjNHLyTC19

“Deputies responded to a fight call at the ARCO gas station,” The Yucaipa Police Department reported. “When deputies arrived, two subjects were contacted and they both refused to press charges. No other victims came forward during that time. In light of social media posts and video that has surfaced, we believe there may be additional victims. They are encouraged to contact the Yucaipa Police Department to be included in the investigation.”

Kris Wyrick joins Owen to explain the details of his violent encounter with Antifa members in California.

The refusal to press charges (and dox themselves) certainly strikes me as a sign these were antifa.

They continued: “We have been made aware of photos circulating online, depicting business owners on rooftops and on their property with weapons. We have reached out to our business owners and residents in an attempt to inform and educate them, as it relates to weapons violations.”

We’ll have to wait and see whether these folks are prosecuted for defending themselves as rioters were busy looting and wrecking havoc in nearby San Bernardino.

Leftists on social media were whining about that whole “white people with big guns” thing again.

This is SICKENING. White people in Yucaipa are allowed be outside with guns rn, no questions asked. While the Black community is protesting for their lives and the racial injustices they have been facing for CENTURIES and they are the ones to be seen as a threat? Disgusting. pic.twitter.com/OIk1SYlyez

Please DO NOT PROTEST IN YUCAIPA. there are some evil people here and they don’t care if you’re dead please stay away from these mfs

He’ll yeah, way to go! Glad Yucaipa is defending themselves and the businesses. Guns are being used safely and properly by people who are responsible for their actions. They are only precautions and will only be used as a last resort. Being scared is not needed unless you act up. pic.twitter.com/goIwClMaog

Here’s what went down in nearby San Bernardino:

Vandals now trying to break into the @BankofAmerica in #SanBernardino pic.twitter.com/7QCx5J9j5z

Looters were encouraged on social media to hit up suburbs like Yucaipa “filled with rich nasty [whiteys]” and “apply damage there” after San Bernardino was left in ruins:

REDLANDS, YUCAIPA, UPLAND, RANCHO ALL FILLED WITH RICH NASTY YTS.. APPLY DAMAGE THERE.
SAN BERNARDINO IS ALREADY IN RUINS PRIOR TO THESE PROTESTS.

I guess it didn’t work out as planned.

And this is why no one should ever move to Yucaipa bye pic.twitter.com/ocwEW3aapL

Yucaipa did a great job defending their city. These liberals crying racist have no idea what they are talking about. No looters in this town. Yucaipa protects its own of all colors. pic.twitter.com/10jbDWpkl3

One would think the police would be too busy trying to arrest looters and rioters to have the time to punish a small town for defending themselves but in the New America™ standing in the way of the mob trying to rob you in the name of “social justice” is the ultimate crime.

Hopefully, the police’s statement was just to placate the mob and sanity will prevail.