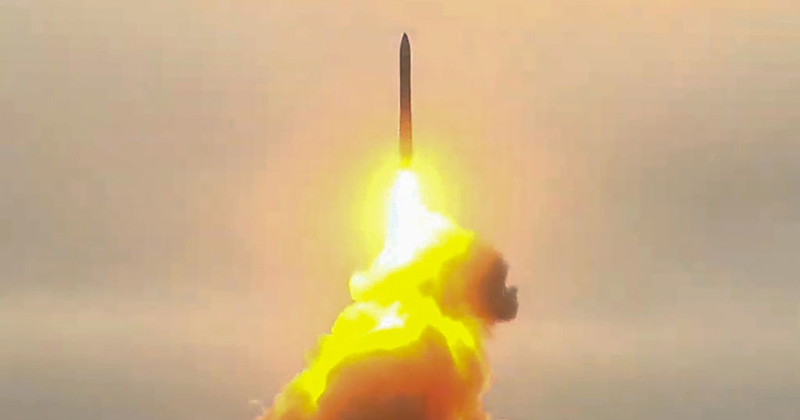 Though all eyes have been focused on the emerging ‘new Cold war’ scenario between the US and China, Russia’s military has just issued a rare and eye-opening statement which represents perhaps the most severe threat to come out of ongoing New START extension negotiations thus far.

“Russia will perceive any ballistic missile launched at its territory as a nuclear attack that warrants a nuclear retaliation, the military warned in an article published Friday,” AP writes.

“The harsh warning in the official military newspaper Krasnaya Zvezda (Red Star) is directed at the United States, which has worked to develop long-range non-nuclear weapons,” the report continues.

The incompetent war criminal, George W. Bush, has graduated from child-like paintings to stringing words together into sentences, but just like his art- its overpriced crap.

In the article some of Russia’s top generals, including senior officer of the Russian military’s General Staff, Maj.-Gen. Andrei Sterlin, claimed that in the event of an attack, radar and anti-air systems will have no way of knowing if a ballistic missile has a nuclear warhead or not.

“Any attacking missile will be perceived as carrying a nuclear warhead,” the Russian military publication said. “The information about the missile launch will be automatically relayed to the Russian military-political leadership, which will determine the scope of retaliatory action by nuclear forces depending on the evolving situation.”

“Russia has designated the ‘red lines’ that we don’t advise anyone to cross,” the Krasnaya Zvezda article said further. “If a potential adversary dares to do that, the answer will undoubtedly be devastating. The specifics of retaliatory action, such as where, when and how much will be determined by Russia’s military-political leadership depending on the situation.”

The military publication clearly upped the ante in a huge way, no doubt seeking to bolster Russian diplomats’ leverage as the landmark nuclear arms reduction treaty, New START, could be on the chopping block after the US pulled out of the Intermediate-Range Nuclear Forces Treaty (INF).

New START will expire in February 2021 if the two sides don’t agree to renew it. So far ongoing talks between Moscow and Washington have failed to extend it by up to five years, despite pressure to strike an extension by America’s allies.

There were talks in mid-June that led nowhere, as well as at least three days of talks at the end of July in Vienna. It appears that while Russian diplomats talk nice in Vienna, Russia’s military is engaged in strong arm tactics to give the diplomats bigger bargaining position as the treaties extension is weighed.

The Kremlin also appears keen on reminding Washington in the clearest terms possible what a post nuclear arms control world looks like – namely, the likelihood of a new nuclear arms race in a deeply uncertain ‘Wild West’ scenario.