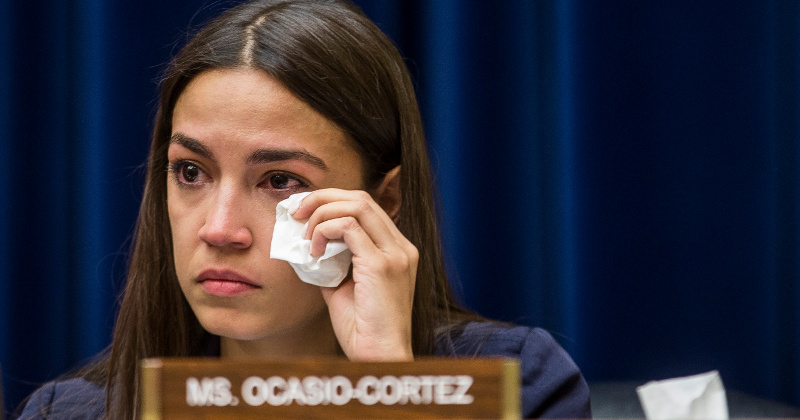 AOC’s Monday tweet linked to another with an image of the Carquinez Bridge in Vallejo, California engulfed in a massive plume of smoke.

The GOP like to mock scientific warnings about climate change as exaggeration. But just look around: it’s already starting.

We have 10 years to cut carbon emissions in half. If we don’t, scenes like this can get much worse. #GreenNewDeal https://t.co/GNvk7DYFJT

“Here’s what the fire looks like in Vallejo, California right now,” climate change crusader Bill McKibben wrote in a message with the image. “The forces we’ve unleashed are beyond terrifying.”

The freshman congresswoman from New York didn’t hesitate to leverage McKibben’s hysteria to promote the Green New Deal, AOC’s socialist plan to save the world from climate changes she claims will end human existence. The plan involves the government takeover of the energy industry, retrofitting every building in America to eco-friendly standards, the elimination of fossil fuels, planes, cars, and other traditional transportation, as well as cows and other environmentally unfriendly foods.

“We have 10 years to cut carbon emissions in half,” AOC tweeted. “If we don’t, scenes like this can get much worse. #GreenNewDeal”

AOC and other climate alarmists point to the raging wildfires in California as evidence the changing climate is attacking people with a vengeance – attacks rooted in racism. Other examples of climate violence include hurricanes, tornadoes, snow storms and other weather events that have been documented since the beginning of time.

Alex Jones showcases the fallout of the leftist establishment falling over themselves attempting to demonize President Trump for ridding the earth of one of the most heinous terrorist criminals on the planet.
By the way, our Everything Must Go Emergency Sale is now live! Get 70% off Survival Shield X-3 and an additional 50% off other products with free shipping and double Patriot Points!

Last month, AOC posted a video of damage from Hurricane Dorian from the Bahamas.

This is what climate change looks like: it hits vulnerable communities first.

I can already hear climate deniers screeching: “It’s always been like this! You’re dim,” etc.

No. This is about science & leadership. We either decarbonize&cut emissions, or we don’t & let people die. https://t.co/paUHKAp03e

“This is what climate change looks like: it hits vulnerable communities first,” she wrote. “I can already hear climate deniers screeching: ‘It’s always been like this! You’re dim,’ etc.

“No. This is about science & leadership,” she wrote. “We either decarbonize&cut emissions, or we don’t & let people die.”

In reality, emissions, science, leadership and other factors AOC cites to support climate change and the Green New Deal have nothing to do with how many of the recent fires in California got started. Data shows the vast majority started with human intervention.

According to the Insurance Information Institute:

As many as 90 percent of wildland fires in the United States are caused by people, according to the U.S. Department of Interior. Some human-caused fires result from campfires left unattended, the burning of debris, downed power lines, negligently discarded cigarettes and intentional acts of arson. The remaining 10 percent are started by lightning or lava.

According to Verisk’s 2017 Wildfire Risk Analysis 4.5 million U.S. homes were identified at high or extreme risk of wildfire, with more than 2 million in California alone.

Just last week, San Jose police arrested 68-year-old Freddie Graham of Missouri as he attempted to board a flight back home after visiting the area for a high school reunion. Deputy District Attorney Bud Porter told the Kansas City Star Graham rented a car and drove the “narrow, windy roads” near Calaveras Reservoir in September, pitching lighted pieces of paper out the car window along the way. Police believe Graham set at least 13 fires over two days that were collectively referred to as the Reservoir Fire, according to the East Bay Times.

Graham reportedly told investigators he was in town for his 50th high school reunion, and he had planned to drive Calaveras Road with his wife on the trip but she passed away in 2018.

Investigators wrote “because she passed away and could not be with him, it made him emotional, starting the fires.”

He could spend decades in prison and pay millions in fines, if convicted.