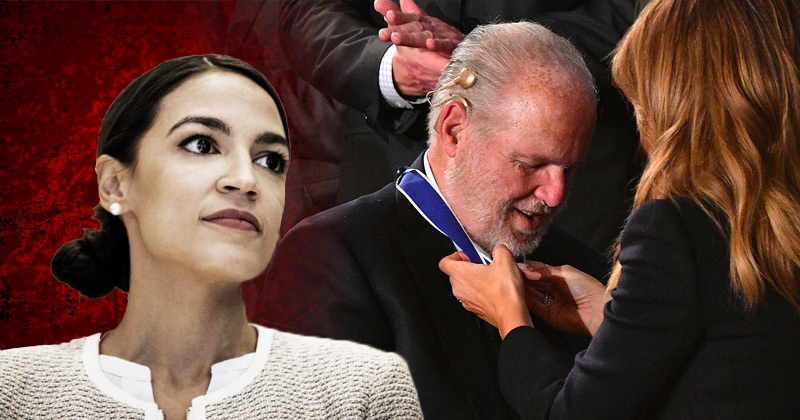 President Trump should not have awarded the Medal of Freedom to “virulent racist” Rush Limbaugh, according to Congresswoman Alexandria Ocasio-Cortez.

The Democrat House representative from New York had lots to say about the award presented to Limbaugh Tuesday night at the 2020 State of the Union Address, despite refusing to attend the event.

For one, the award is a high honor that should not have been bestowed to a “virulent racist,” Cortez said.

“The presidential medal of freedom is an extraordinarily sacred, um, award. We’re talking about putting someone on the same level as Rosa Parks, you know, for example, in terms of their contributions to American progress. Uh, Rush Limbaugh is a virulent racist,” Ocasio says, without offering proof to back up the slanderous remark.

Says that he, while having cancer, was a "joke," needed an "Opera moment," and was "nauseating" pic.twitter.com/VrsIj1Cmlj

Cortez next pivots to another issue she had – the fact it did not have its own separate event, which she says cheapens the award.

“…Even just on top of that, uh, to do it in the middle of the SOTU and not even dignify it with its own ceremony as it has, there are all sorts of norms being violated, not just for people’s humanity, but also it truly just cheapens the value of it.”

“The Squad” leader’s problems with the event didn’t stop there.

She also had a problem with Limbaugh’s surprised reaction at receiving the medal, which she says he should have expected since it’d been in the news all day.

“Him pretending to be surprised was such a joke. This has been news all day. There have been multiple reports from multiple news outlets saying that Rush Limbaugh was going to receive the Medal of Freedom, and then Trump announced it and he had to pretend that this was some kind of Oprah moment was so disingenuous.”

Actually, the award possibly did come as a surprise. Reports claimed the President told reporters he was interested in awarding Limbaugh the medal as early as next week, but added he would prefer to do it during the SOTU.

From Politico, Tuesday, ahead of the SOTU:

The president also said he could award the Medal of Freedom to Limbaugh as soon as next week, adding that his preference would be to do it during the State of the Union, according to two of the people familiar with his comments.

Limbaugh, who’s hosted his influential conservative talk show for over 30 years, announced during his Monday broadcast he’d been diagnosed with stage 4 lung cancer.

Despite attending the 2019 SOTU, Ocasio-Cortez announced Tuesday mere hours ahead of the event that she would not be in attendance because she didn’t want to “use [her] presence at a state ceremony to normalize Trump’s lawless conduct & subversion of the Constitution.”

After much deliberation, I have decided that I will not use my presence at a state ceremony to normalize Trump’s lawless conduct & subversion of the Constitution.

None of this is normal, and I will not legitimize it.

Consequently, I will not be attending the State of the Union.

Alex Jones breaks down how Pelosi’s bizarre behavior during the State of the Union address is a sign that the Democratic Party is officially dead.