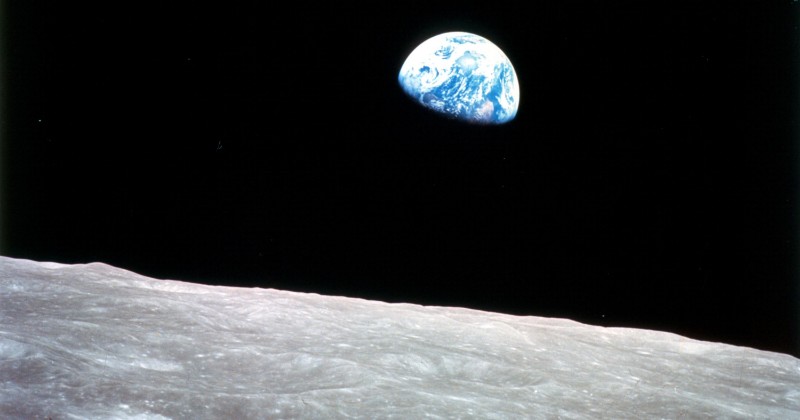 Christmas Eve, 1968. As one of the most turbulent, tragic years in American history drew to a close, millions around the world were watching and listening as the Apollo 8 astronauts – Frank Borman, Jim Lovell and Bill Anders – became the first humans to orbit another world.

As their command module floated above the lunar surface, the astronauts beamed back images of the moon and Earth and took turns reading from the book of Genesis, closing with a wish for everyone “on the good Earth.”

“We were told that on Christmas Eve we would have the largest audience that had ever listened to a human voice,” recalled Borman during 40th anniversary celebrations in 2008. “And the only instructions that we got from NASA was to do something appropriate.”

The mission was also famous for the iconic “Earthrise” image, snapped by Anders, which would give humankind a new perspective on their home planet. Anders has said that despite all the training and preparation for an exploration of the moon, the astronauts ended up discovering Earth.

The rest of us can better imagine what it was like for the crew when they made that iconic photo, thanks to a 2013 NASA visualization which draws on richly detailed maps of the moon’s surface made from data gathered by NASA’s Lunar Reconnaissance Orbiter (LRO). Also in 2013, the first ever “Earthrise” photo, taken by NASA’s Lunar Orbiter 1 in 1966 and restored and enhanced by the Lunar Orbiter Image Recovery Project in 2008, was sent to NASA’s Lunar Atmosphere and Dust Environment Explorer (LADEE) mission in lunar orbit, using the Lunar Laser Communication Demonstration system.

“There is a Santa Claus”

The Apollo 8 astronauts got where they were that Christmas Eve because of a bold, improvisational call by NASA. With the clock ticking on President Kennedy’s challenge to land on the moon by decade’s end, delays with the lunar module were threatening to slow the Apollo program. So NASA decided to change mission plans and send the Apollo 8 crew all the way to the moon without a lunar module on the first manned flight of the massive Saturn V rocket.

The crew rocketed into orbit on December 21, and after circling the moon 10 times on Christmas Eve, it was time to come home. On Christmas morning, mission control waited anxiously for word that Apollo 8’s engine burn to leave lunar orbit had worked. They soon got confirmation when Lovell radioed, “Roger, please be informed there is a Santa Claus.”

The crew splashed down in the Pacific on December 27. A lunar landing was still months away, but for the first time ever, humans from Earth had visited the moon and returned home safely.