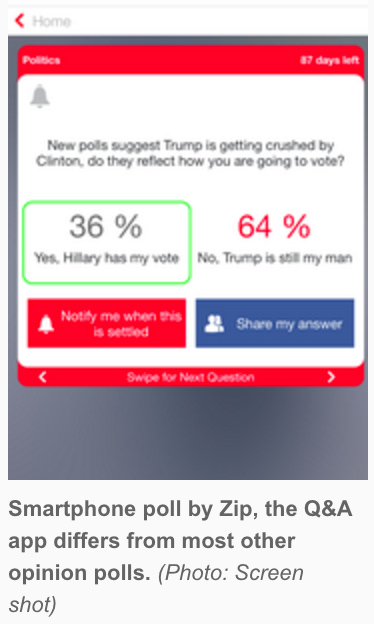 Despite a majority of opinion polls showing the 2016 presidential election going to Democrat Hillary Clinton, a smartphone app developer says his data suggests challenger Donald Trump will be the victor.

“Based on the stats we see, he looks strong,” says Ric Militi, co-founder of San Diego-based Crazy Raccoons, maker of the Zip question and answer app. His app poses questions and polls responses based on an average of 100,000 daily users. “I go with Trump, based on what we see.”

According to the RealClearPolitics average of opinion polls, which are performed by calling people on landlines and cell phones, and answering questions on websites, Clinton leads with 47.8%, to Trump’s 41.0%.

How can Zip’s results be so different?

“We’re not a poll. We’re a conversation, and 100% anonymous,” Militi says. “People feel comfortable answering questions without fear of being bullied or being called a racist. People can express themselves safely, and you get a pure answer.”