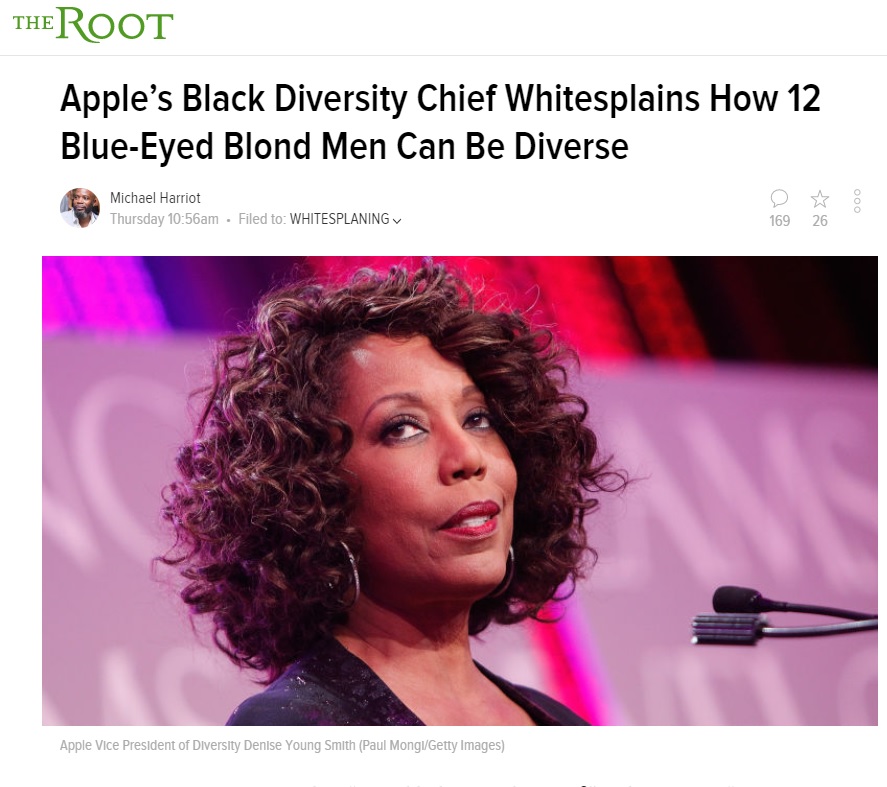 Apple VP of Inclusion and Diversity Denise Young Smith apologized on Friday for saying that a group of “blue-eyed blonde men” can contribute to diversity because of their “different life experiences.”

“Diversity is the human experience,” Smith said last week at the One Young World Summit in Bogota, Colombia. “I get a little bit frustrated when diversity or the term diversity is tagged to the people of color, or the women, or the LGBT.”

“There can be 12 white blue-eyed blonde men in a room and they are going to be diverse too because they’re going to bring a different life experience and life perspective to the conversation,” Smith said.

Though her comments were widely praised by many, race-hustlers were outraged.

Kudos @Apple and VP for fresh vision of tech diversity.
Does she think I made “incorrect assumptions about gender”?https://t.co/9sQFMyWoyM

These comments undermine progress. Racial diversity MUST be at the forefront of Silicon Valley’s agenda. cc: @Apple https://t.co/UB0Uhx3HCH

“I regret the choice of words I used to make this point. I understand why some people took offense,” Smith said Friday in an internal memo. “My comments were not representative of how I think about diversity or how Apple sees it. For that, I’m sorry.”

Apple Insider noted the company is working aggressively not to hire white people.
According to Apple’s latest statistics, 54 percent of new hires in the U.S. are ethnic minorities, and the company is making strides to improve the mix of females in its workforce.
Earlier this year Apple CEO Tim Cook donated at least $1 million of shareholders’ funds to the far-left Southern Poverty Law Center, which labels conservative Christian organizations like the Family Research Council as “hate groups.”

SPLC’s labeling has inspired terrorist attacks, as NewsBusters has reported: “In August 2012, a shooter entered the Family Research Council (FRC) headquarters to ‘kill as many people as possible.’ The man told investigators he targeted FRC after finding it listed as an anti-gay ‘hate group’ on the SPLC’s ‘Hate Map.'”