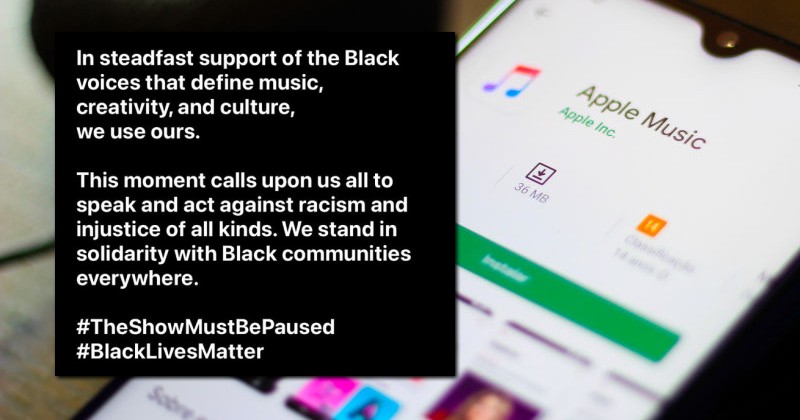 Apple has frozen the ‘browse’ feature on its music app and replaced it with a playlist that includes the song ‘F**k tha Police’.

The stunt is part of #BlackoutTuesday, with celebrities and corporations bombarding social media with messages and blacked out squares about how much they support the violent riots, I mean “protests” taking place across America.

When a user tries to access the browse feature on the app, they are met with a message that says “In steadfast support of the Black voices that define music, creativity, and culture we use ours. This moment calls upon us all to speak and act against racism and injustice of all kinds. We stand in solidarity with Black communities everywhere. #TheShowMustBePaused #BlackLivesMatter.”

Because the company that uses Chinese slave labor where the factories literally have to be surrounded by suicide nets to prevent abused workers killing themselves really cares about “justice”.

The playlist includes a song by NWA called ‘F**k tha Police’ – which includes the lyrics, “Beat a police out of shape. And when I’m finished. bring the yellow tape. To tape off the scene of the slaughter,” and “Punk police are afraid of me! Huh, a young nigga on the warpath. And when I’m finished, it’s gonna be a bloodbath. Of cops, dyin’ in L.A.”

It’s interesting that when protesters in Hong Kong were being violently oppressed by Communist China, Apple removed an app that protesters were using to organize.

Almost like Apple doesn’t really care about “justice” and is only content to corporate virtue signal when they know their bottom line isn’t at risk.