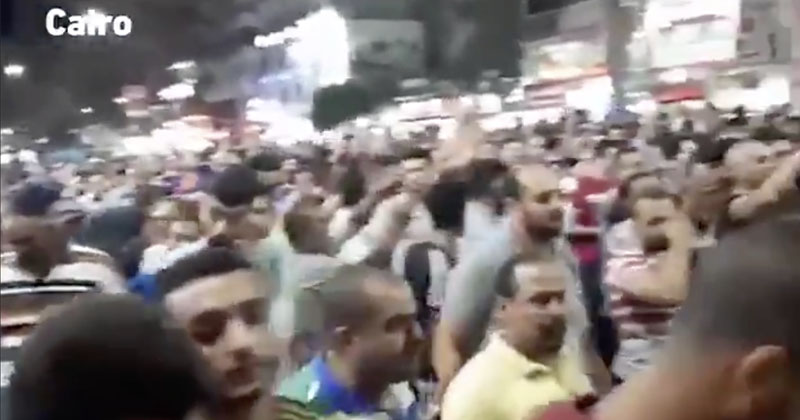 Overnight mass protests popped up in the streets of Cairo involving hundreds, possibly thousands, who took over a central square of the capital to demonstrate against strongman Egyptian ruler Abdel Fatah al-Sisi.

Like the prior so-called ‘Arab Spring’ protests which rocked Egyptian streets starting in 2010 through 2011, which began the chain of tumultuous events which ended in Sisi’s taking power via coup d’état toppling the Muslim Brotherhood’s Mohamed Morsi, Friday night’s spontaneous demonstrations, which also hit the port cities of Alexandria and Suez, were the result of coordinated online organizing.

Pro-government television broadcasts had dismissed the sizable demonstrations, news of which quickly went viral, as minuscule and the mayhem of small groups of youths.

Other pro-government media reports said the scene around Tahrir Square, site of the first Arab Spring mass protests, was quiet; however, international correspondents cited up to “thousands” gathered there.

#Egypt: Demonstration in front of the journalists union in downtown, Cairo, chanting "#Sisi Must Leave." https://t.co/mqkdxzGG1b

The protesters’ message was chiefly focused on anti-corruption, according to international reports, and is an incredibly risky endeavor in Sisi’s Egypt — given the de facto state of martial law that exists and police heavy handed tactics which include imprisoning journalists, and widespread reports of torture.

More from Egypt tonight, because, wow. This is Mahalla which you could argue is where the Arab Spring really began, on April 6, 2008. pic.twitter.com/n5JRqZrZge

You realize what it means to protest against Sisi? It could rotting in jail, being killed and/or your family going through various forms of hell pic.twitter.com/cpnziG4c0p

As The Guardian reports, citing close to 60 arrests overnight:

Security forces moved to disperse the small and scattered crowds in Cairo late on Friday using teargas but many young people stayed on the streets in the centre of the capital, shouting “leave, Sisi”, Reuters reporters at the scene said.

At least 55 people were arrested on the charge of demonstrating without permission, according to one local media outlet citing Egypt’s Ministry of the Interior. The Cairo-based Egyptian Centre for Economic and Social Rights recorded 36 arrests in Cairo and outside of the capital. The number of those arrested is expected to rise.

UPDATE: protests have now spread to all major cities in #Egypt calling for the removal of President Abdel Fattah el-Sisi. Here’s a thread on what we know so far. #ميدان_التحرير pic.twitter.com/PRGcw5XAav

Despite those taking to the streets potentially facing immediate arrests, Friday’s demonstrations were impressive enough in size to likely continue through the weekend, and could get fiercer as they gain in momentum.

No matter how large such anti-Sisi street demonstrations might become, they are unlikely to gain much support or acknowledgement out of the White House, given Egypt’s military ‘deep state’ has for decades since the 1979 Egypt-Israel peace treaty was signed just after the Camp David Accords, been bought and paid for by American foreign aid.

Trump’s recent outburst at the G7 summit in France might also be an indicator of where things stand: he reportedly called out “Where’s my favorite dictator!” while referencing the Egyptian president.

Alex Jones breaks down the victory of perseverance in the face of overwhelming oppression.