At the Mises Institute blog today, economist Nicolás Cachanosky has written a nice piece examining Pope Francis’s minor document (i.e., not an encyclical) that mentions some issues related to poverty and markets. Most of the responses from the right to the document have been no less than hysterical, but Cachanosky’s piece methodically takes down the factual assumptions behind the Pope’s comments. Most of the Pope’s mistakes are based on errors of fact, which Cachanosky exposes. It is not true, for instance, that income inequality is worse in more free countries than in less free countries, and it is not true that more free economies have poor populations that are worse off than they are in less-free countries. Indeed, the opposite is true. The poor are much better off in the more free countries, as the facts bear out. 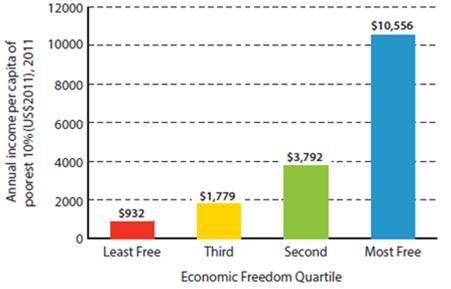 I’ve been quite disappointed in the reaction from many corners of the the libertarian and conservative right on this. Rush Limbaugh’s reaction, as expected, was downright ridiculous, with him calling the Pope a commie, and other such things. I will happily bet you my life savings that Rush Limbaugh has never in his life read a papal document, including the most recent one, which is 80 pages long. I can guarantee you with metaphysical certitude that Limbaugh relied completely on some bullet points given him by one of his show’s producers.

Indeed, if one reads the 48,000-word document, one finds that the document is 90 percent about missionary work and evangelization, with a few paragraphs about markets and consumerism. But this did not stop commentators from declaring that the document is primarily “about economics” which is obviously wrong. The words “market” or “free market” or “consumerism” all combined are used exactly 13 times in 80 pages. This is not a document “about economics” any more than the U.S. Constitution is “about slavery” which it mentions more than once.  The press, naturally, pulled out the Pope’s few comments about economics and made hay with them, and the right wing dutifully responded by making fools of themselves, declaring the Pope to be “Marxist” which is laughably absurd. Some others chimed in to declare that since Marxism is popular in Argentina, the Pope, an Argentinian, is therefore a Marxist. Sound logic, that. (I come from a country where militarist corporatism (aka fascism) is extremely popular, but that doesn’t make me a militarist  or a fascist.)

Indeed, most of the Pope’s comments about the poor are not about markets or states, but are about the proper Christian attitude toward the poor. Because of this, I fear that much of the negative reaction to the Pope remarks stems not from any devotion to free markets (because of course, few conservatives actually care about free markets) but actually from a disdain for poor people. At the heart of the Christian religion is a doctrinaire requirement that believers give alms and regard themselves as obligated to be charitable toward the poor. But anyone who has spent any time with right-wing activists and pundits (many of whom fancy themselves as great paragons of Christianity) know that there is a deep-seated contempt for poor people who are are often regarded uniformly as lazy or somehow deserving of their fates. Any genuine concern for poor people expressed in such circles is regarded as “socialist” talk even if one is in no way suggesting that alleviating poverty is a matter for state intervention (which it is not). Of course, the fact that so many conservatives are so utterly ignorant of how economies work, blinds them from the fact that so much poverty is caused by the federal government they’re always saluting, pledging allegiance to, and generally getting all weepy about every time someone mentions the American flag. Yep, everything would be fine if those single-mothers, who are more or less at the mercy of the boom-bust cycle caused by our wise overlords, would just pull themselves up by their bootstraps and become stock brokers.