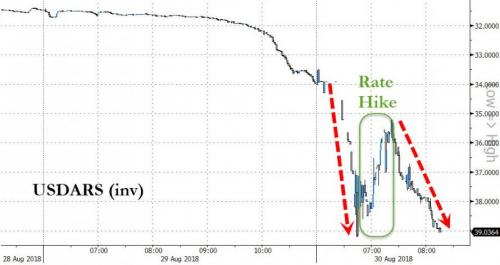 Update 2: Well that’s not supposed to happen!! The peso has just collapsed back to its record lows…

Update 1: Having met pre-market, it appears the Argentina Central Bank (CBRA) decided that if things got worse they would ’emergency hike’ rates. And as the peso collapsed to 39/USD, they have just raised the key 7-day leliq rate to 60% (a 1500bp hike)! The rate was last hiked from 40% to 45% on Aug 13th. They also confirmed there will no rate cuts until December.

Some more details: given the very sharp ARS depreciation (8% yesterday and another 12% this morning) the central bank responded in an extraordinary MPC meeting with an interest rate shock and liquidity squeeze: 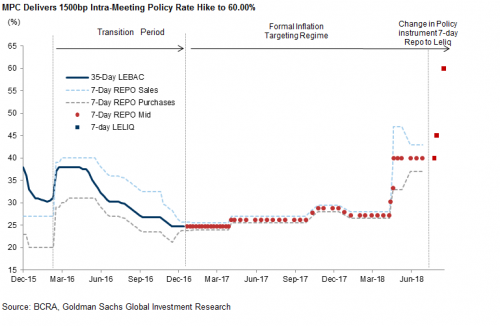 And some thoughts from Goldman:

In our assessment, the sharp intensification of market distress requires a bold policy response. But the fight to anchor the currency and support market sentiment is a battle the central bank cannot win alone. A clear and decisive fiscal response is also needed, for at the root of the current market distress is chiefly the large fiscal financing requirements and the market’s uneasiness with the country’s ability to fund them under normal market conditions. In our assessment, Argentina is fiscally solvent, but the current severe liquidity crisis, if not addressed in due time could eventually undermine solvency. Overall, rather than seeking more funding (IMF and other) to address the current core macro problems/imbalances, we believe a better strategy would be, alongside steps to secure more funding, to adopt policies to reduce more rapidly the size of the (fiscal) problem.

While frontloading of the IMF disbursements is a step in the right direction it is not altogether clear that will be in isolation sufficient to restore market sentiment and stabilize markets. The gradual fiscal adjustment strategy seems to have outlived its usefulness. In our assessment, rather than a gradual approach the authorities should consider a fiscal adjustment shock (rapid reduction of the fiscal funding needs) as the antidote for the market mistrust of the gradualist approach.

Unfortunately, given how ruptured market sentiment is, particularly among domestic agents, at this stage, there are no costless options. Therefore, rather than the programmed reduction of the primary fiscal deficit to 1.3% of GDP in 2019, we believe that it would be helpful to redouble the effort and commit to a zero primary deficit already in 2019 (if not a small surplus) in order to further reduce the funding needs and turn around expectations. We acknowledge that would require deeper politically-sensitive spending cuts but the alternative of not doing so may well be costlier economically, politically, and socially.

For now, it’s not working. 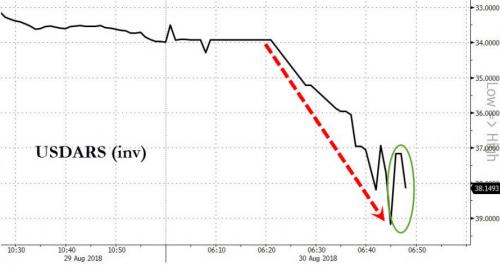 As Bloomberg’s Sebastian Boyd notes, the real effective exchange rate is now the lowest since 2011, according to JPMorgan’s index, and I have seen a number of economists today calling the currency cheap. If 60% isn’t enough to stop the selloff (and chasing Argentine carry has been a horrible trade lately), the next measure might be a shock fiscal adjustment. But a 60% monetary policy rate is going to provide a shock of its own. For an economy that may already be in recession, that’s brutal. 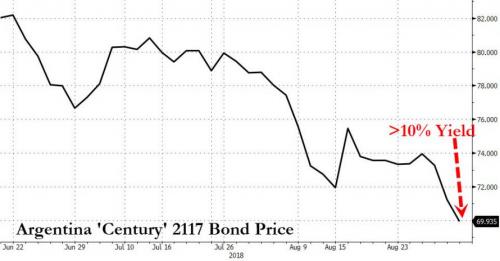 Argentina’s Peso has plummeted over 11% at the open this morning (after crashing almost 8% yesterday) as Macri’s request for faster IMF disbursements has backfired, raising investor uncertainty about Argentina’s ability to repay liabilities. 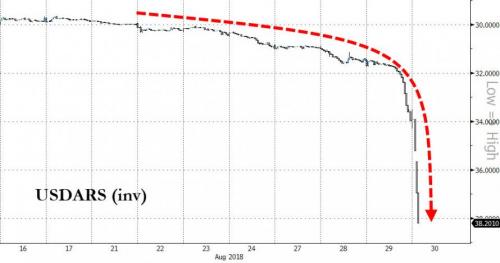 This is the worst day for the peso since Dec 2015’s devaluation.

Paul Greer, a money manager at Fidelity International in London, suggests that Mauricio Macri’s administration has made “crucial messaging and strategy mistakes” during the past few years, adding that communication with investors has “consistently been a problem.” 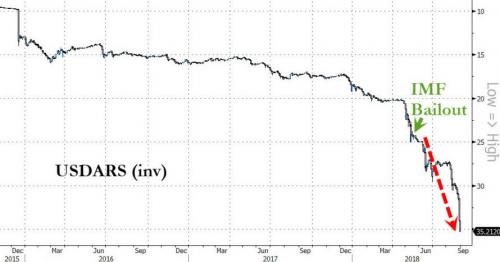 Greer argues that Macri must overhaul the team managing nation’s economy and finances to restore investor confidence, but as Santander notes, unbalanced FX market and volatility in local asset prices could continue during the coming months due to structural deficit of hard currency and uncertainty with Brazil elections. Recent peso devaluation followed strong hedging demand from corporates and individuals in the context of widespread uncertainty that “were not matched by an almost non-existent supply in the last days.” Santander adds that Central Bank firepower to intervene in the FX market is limited.