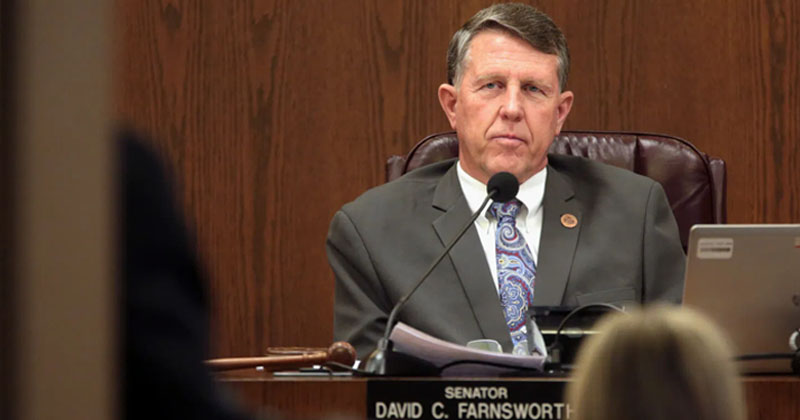 Farnsworth told the Arizona Department of Public Safety that state Sen. Kate Brophy McGee (R-Phoenix) made a veiled threat to him during a meeting the two had earlier this month, reported the Arizona Capitol Times.

“The police officer asked me if I felt threatened, and I thought, ‘Well, that’s pretty much all I’ve thought about for the last 24 hours. So, I guess I did feel threatened,’” he said after meeting with police.

“Is the threat real? I don’t know. That’s what I tried to determine by asking her. She certainly didn’t make me feel any better. She didn’t back away,” Farnsworth added.

From the Arizona Capitol Times:

The two Republican senators often don’t see eye-to-eye politically, but both described having a good working relationship that become strained over the past several months as Farnsworth met with a group of critics of the Arizona Department of Child Safety.

Farnsworth’s meetings, held every other week in the Senate’s minority caucus room, included parents with children in state custody and guests from the AZ DCS Oversight Group, which has accused DCS of direct involvement in child trafficking.

Brophy McGee pushed back on Farnsworth’s characterization of her remarks, saying she was trying to tell him that the “crazy parents” critical of the DCS were “unbalanced.”

“These people are unbalanced, and I kept telling Senator Farnsworth that and he went to them and told them I said they’re unbalanced,” she said. “It’s like ‘thank you, the target on my back just got bigger,’ and then he feels threatened? Welcome to my world.”

Farnsworth stressed that he doesn’t personally believe anyone at DCS is selling children or facilitating trafficking, but he does believe some of the roughly 550 children who DCS lists as “missing,” “runaways” or “no ID placement” have been kidnapped, the Arizona Capitol Times reported.

“When I first heard about this, I believed that children from Arizona (custody) were ending up in sex trafficking,” he said. “Now, after the research I’ve done, I’m confident of it. But I can’t prove it.”

“Corruption is what got me involved,” he said. “I wanted to root it out. Here I am, termed out, I have one session left and I finally find something that wow, this is worth fighting for.”

“The safeguards in place to protect our children are not enough,” he added. “That’s the bottom line.”

Farnsworth also alleged that two former Republican state senators from Arkansas and Oklahoma who were shot dead within days of each other over the summer were “executed” because they were investigating links between their own states’ child protective agencies and global sex trafficking rings.

Infowars has previously reported on instances of children under Child Protective Services care who ended up in the sex trafficking trade.

Since President Trump was sworn into office in 2017, Department of Justice efforts to stop child sex trafficking have skyrocketed.

And just recently, the DoJ announced its largest ever worldwide bust of child pornography in history.

Watch YouTuber Amazing Polly deliver a thorough breakdown of the ongoing situation with Farnsworth below:

Also check out this bombshell 2009 Alex Jones interview with Georgia Senator Nancy Schaefer, who was murdered in her home amid her investigation into CPS and child trafficking.