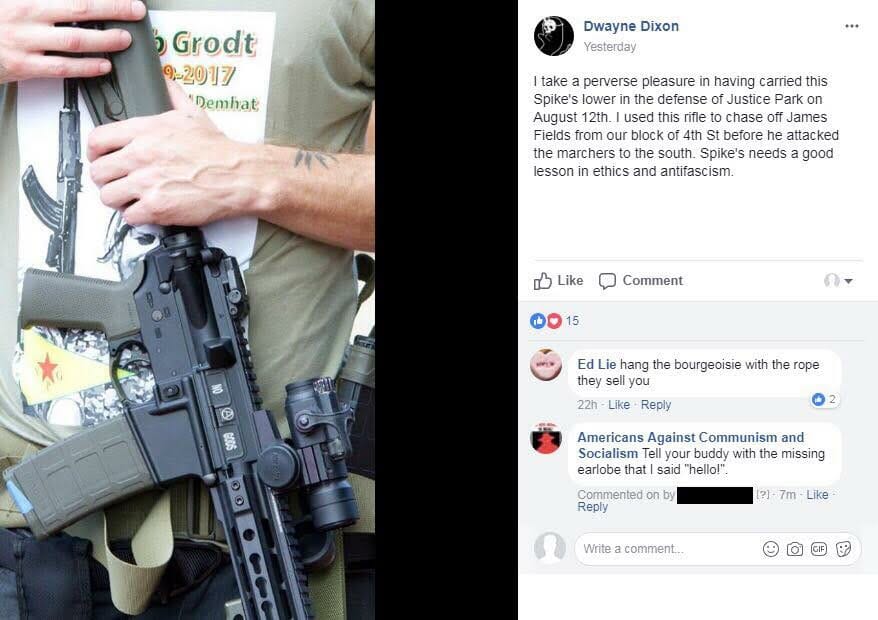 An Antifa leader admitted on social media to chasing down the Charlottesville driver with a rifle, causing him to ram into a group of counterprotesters.

University of North Carolina anthropology professor Dwayne Dixon is the leader of armed Antifa group Redneck Revolt, who admitted to using armed intimidation to chase James Alex Fields, Jr. into a group of fellow counterprotesters which resulted in one death and dozens injured last August.

“I take perverse pleasure in having carried this Spike’s lower in the defense of Justice Park on August 12th. I used this rifle to chase off James Fields from our block of 4th St before he attacked the marchers to the south. Spike’s needs a good lesson in ethics and antifascism,” Dixon posted on Facebook.

The post included a picture of Dixon holding a rifle. His account has since been made private.

The “Spikes” Dixon refers to Spikes Tactical, a firearm company that triggered leftists last week with a social media ad that read “not today Antifa.”

The corporate media was quick to brand Field’s actions as terrorism, but according to authorities, Fields expressed remorse and shock after the incident, asking “Are they okay?”, suggesting the tragedy could have been an accident.

“He did appear to be very shocked,” detective Steve Young said.

Revelations that an armed Antifa thug chased down Fields bolster that theory, especially given Dixon said he did so just before Fields drove into protesters.

Dixon was interviewed by ABC News following the violence, saying he felt he was “leaving a battlefield.”

“They’re not just speaking – they’re marching. They’re marching in a way that’s intimidating, as we all know is harking back to the torch light rallies of the Nazi era.”

“When the left uses violence, in the rare cases that it happens, it’s resistance,” Dixon said.

Fields, 20, is currently charged with first-degree murder for killing Heather Heyer and injuring 32 other people at the “Unite the Right” rally in Charlottesville, Virginia.

As we covered, the left is more than willing to justify violence for political aims, but loses their marbles if President Trump calls third-world impoverished countries “shitholes,” or suggests politicians “would do anything” for campaign contributions.