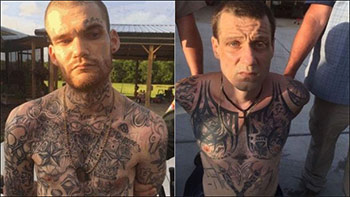 A man in Tennessee caught two escaped prison inmates Thursday, holding them at gunpoint on his property until law enforcement arrived.

An astonishing photo shows the two tattooed inmates lying facedown in handcuffs on the Tennessee man’s driveway, whom law enforcement are regarding as a hero.

Numerous state and federal law enforcement agencies, including the FBI, the US Marshals Service, and the BATF, launched a multi-state search for the fugitives offering a $130,000 reward for information that could lead to the “dangerous beyond description” pair’s arrests.

“While they were on the run, the pair allegedly stole five vehicles, robbed two homes, tied up and terrorized an elderly couple; and led police on a chase where speeds reached 100 mph, officials said,” reports CNN.

The duo also fired upon law enforcement officers amid the high-speed chase.

After crashing a stolen SUV, the men ran into the woods and came across an armed homeowner near the town of Christiana.

“The homeowner was alerted somehow, he looked outside and saw the suspects trying to steal his vehicle,” Tennessee Highway Patrol Lt. Bill Miller stated Friday.

At that point, the homeowner phoned his neighbor who came over with his own firearm to help hold the two escaped inmates at gunpoint. The convicts were defenseless after leaving their firearms in the crashed vehicle.

Law enforcement agencies heaped praise on the homeowner for having the courage to bring an end to the days-long search.

“I can’t say enough about the bravery of the homeowner, and what they took on, the wherewithal to call us and give us the information so we could get over there and apprehend these two subjects,” Rutherford County Sheriff Mike Fitzhugh said.

“True bravery is what’s caused us to stand before you tonight to talk about a successful capture instead of a tragic end,” said Tennessee Bureau of Investigation Director Mark Gwyn. “So I’m totally grateful to everyone involved.”

Rowe, 43, was serving a life sentence without parole, and DuBose, 24, had a 20-year term. Additional charges against the two have not yet been announced. An investigation into how the men were able to enter the driver compartment of the prison transport bus is also underway.

“If convicted of capital murder for the deaths of the guards, they could now face the death penalty,” reports the Daily Mail.