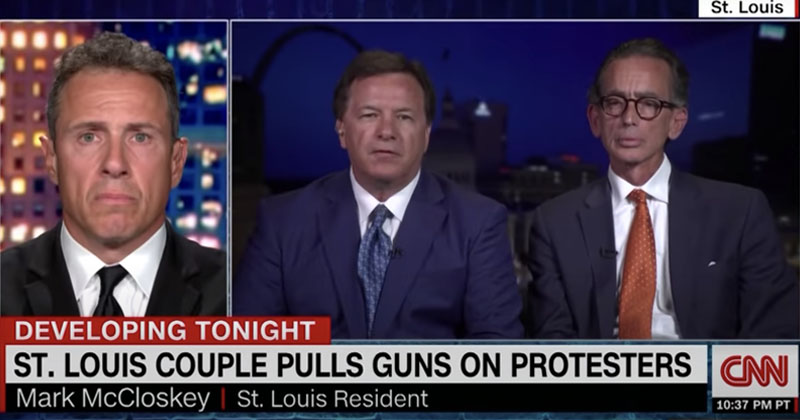 “A guy stands in front of me, pulls out two loaded pistol magazines, snaps them in front of my face and says, ‘You’re next.’ If you were there, Chris, I think you’d feel like you had a right to defend yourself, as well,” Mark McCloskey, joined by his legal counsel, explained on Tuesday.

Cuomo admitted that he would also feel compelled to defend himself in those circumstances.

“Absolutely. Somebody takes out magazines, ammunition and clicks it and makes a direct threat, I would feel threatened, 100 percent,” Cuomo replied.

But Cuomo then made the argument that President Donald Trump retweeted an ABC video clip of McCloskey and his wife defending their home with firearms because of the racial optics of a white couple taking up arms against black “protesters.”

“Look, I know you are going through a process with this. I welcome you having counsel. If you were within your rights to do what you were doing, it should be judged as such,” Cuomo told McCloskey. “I wanted to talk to you about the broader implications because it’s just a horrible picture of what’s going on in America right now. So, to me, it’s not about what’s right and wrong in a court of law, it’s what we have right and wrong about how we treat each other. And that’s why the president retweeted this tweet.”

“Mr. Watkins, you know it. And, Mr. McCloskey, you know it. He retweeted it because he liked the image of white resistance to this [Black Lives Matter] movement – and I’m not saying that was fair to you – but we know that’s why he did it, because that’s why he deleted it. I wanted you to speak for yourself.”

Trump can’t even retweet a mainstream media news item without being branded as a race-baiting monster.

McCloskey dismissed Cuomo’s demagoguing, telling him, “I’m glad you are a mind reader because no one else thinks you are.”

A CNN producer then alerted Cuomo that Trump had not deleted the McCloskey video.

“Oh, in fact, he didn’t delete it. Good, makes my point,” Cuomo smirked.

Cuomo then confessed he did jump to conclusions about the McCloskeys defending their home, claiming he was simply “assessing a pattern.”

“We both know you don’t have to be a mind reader to assess a pattern. You’re not a mind reader either. I haven’t seen the video of the person clapping the magazines. But you drew certain inferences from the behavior before you,” Cuomo explained. “We’ve seen behavior before us, I’m making a judgment. I’m sorry that you were caught in it the way you are, if it’s not what you intended by all of this, Mr. McCloskey.”

When CHAZistan Marxists showed up at HER house, Seattle Mayor changed her tune. As the mob fires into SUV and an arsonist sets himself on fire trying to burn down a home, what are YOUR legal rights to protect yourself? The case of the lawyers in St. Louis standing outside their home is a good example. The social media mob had a field day with the lawyers in St. Louis but now another picture emerges