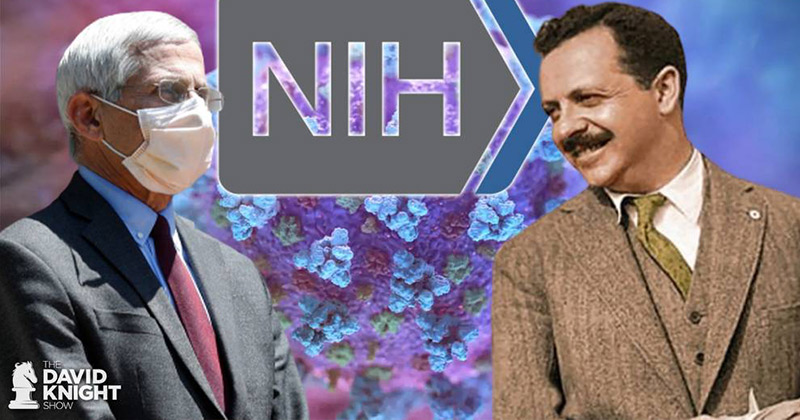 David Knight exposes a massive, 4,000 person, propaganda study into the art of perfecting COVID lies.  The stated “Primary Outcome Measure” of the study is to test the “likelihood of getting a COVID-19 vaccination” in test groups after being shown different angles of their pro-vaccine propaganda.  The study is also testing “Secondary Outcome Measures” such as “Fear of those who have not been vaccinated” and, “Social judgment of those who do not vaccinate”.

Here are the 10 angles of attack PSA’s they’re planning:

On 8/11/2020’s show, Knight reports, “A listener sent me a very important document on the NIH’s ‘National Library of Medicine, talking about how they’re propagandizing people.  They created propaganda ads that they play to a group then question them to see if it worked.  It’s focus group testing that they’re calling a “clinical trial”.  This is the sort of thing they do all the time for product ads, and of course, this is a big product rollout for Fauci and his corona-capitalist buddies.”

The Yale study titled,  “COVID-19 Vaccine Messaging, Part 1” was posted on the NIH’s ‘National Library of Medicine’ section of clinicaltrials.gov.  The summary begins, “This study tests different messages about vaccinating against COVID-19 once the vaccine becomes available…  We will compare the reported willingness to get a COVID-19 vaccine at 3 and 6 months of it becoming available”.

Knight explains, “They’re rolling this thing out without any testing, they’re not ever going to know if it works and they’re certainly not going to know if it’s safe.  They don’t do long term studies of vaccines in the first place but they’re rolling this out in just a couple of months.  They’re testing their propaganda, not the vaccine.  They’ll have one control group where they’ll look at their attitude toward vaccines, then show different groups particular messages.  ‘Look at how dangerous and scary this is, we’re all going to die!’

Each message angle’s ability to “nudge” was measured against the attitudes of an un-propagandized group. Here’s how they described the message angles and what they really are about…

“Economic freedom” angle, “a message about how COVID-19 is limiting peoples’s economic freedom and by working together to get enough people vaccinated society can preserve its economic freedom.”  Knight asks,  “Can you see a trend here?  We ‘work together to get enough people vaccinated’.  How are they going to be working together?  Through their corporate partners, the same people trying to enforce masks now are going to be badgering you real hard about vaccines.”

“Self Interest” is the next one, “COVID-19 presents a real danger to one’s health, even if one is young and healthy.”

“Community Interest”, “a message about the dangers of COVID-19 to the health of loved ones.”

“Economic benefit” “COVID-19 is wreaking havoc on the economy and the only way to strengthen the economy is to work together to get enough people vaccinated.”

“Trust in science” angle,  “If one doesn’t get vaccinated that means that one doesn’t understand how infections are spread or who ignores science.”

“Not bravery” angle,  “which describes how firefighters, doctors, and front line medical workers are brave.”  “And of course, they’ll be the first ones forced to get a vaccine,” Knight interjected.  The study continues, “Those who choose not to get vaccinated against COVID-19 are not brave.”

Knight then brings up the issue, “So you’re going to have a control group, and supposedly this group is NOT being told that ‘it’s for freedom and safety, trust science, etc’.  Where are they going to get a group that’s not already getting that message?  That message is already being rolled out everywhere in mainstream media.  Are you going to tell these people they can’t look at CNN, the New York Times, or any mainstream media?  They’re all repeating this message already but it’s not as focused as what the NIH is going to be putting out.  When they’re ready to push these untested vaccines on you, they’ll have a much bigger wave of propaganda coming,  bigger than anything you’ve seen from the mainstream media so far.”

“They’ve already done the test with 4,000 people, they’ve run their propaganda messages, and they’re fine-tuning the results.  If they have billions of dollars to roll out these vaccines to people, can you imagine how much money they’re going to spend to propagandize you?”

Knight concludes,  “First, there will be the propaganda campaign, then you’ll have the police enforcing this lockdown.  This ostracizing of anyone who doesn’t get the vaccine, purging them out of society, locking them down in solitary confinement.  That’s what they have planned for you and me because I’m not getting it.  Are you?”