While Chick-fil-A has determined to move past the controversy raised by its president’s recent comments on family, Christian values, and same-sex marriage, homosexual activists and their fellow travelers seem to have found an object worthy of their irrational rage. In mid-July, Chick-fil-A president Dan Cathy told a Baptist publication that the restaurant chain his father, Truett Cathy, founded in the 1940s has always been run on strong Christian and traditional family values. He later told a nationally syndicated radio program that America was in danger of God’s judgment for its arrogant and anti-Christian embrace of same-sex marriage. 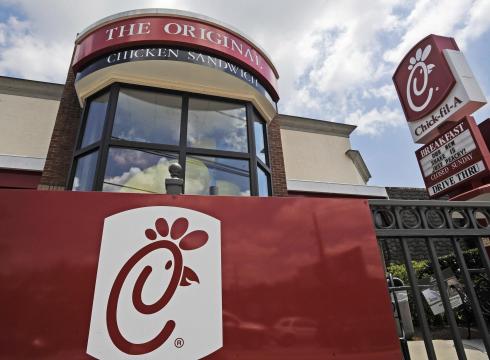 The resulting national backlash from the homosexual activist community — which, among other actions, encouraged a boycott of Chick-fil-A restaurants — prompted the restaurant chain to remind the public that it exists to sell chicken sandwiches, not fight political battles. In a July 19 statement the chain said that it would “leave the policy debate over same-sex marriage to the government and political arena,” and that its restaurants would continue to focus on treating “every person with honor, dignity and respect — regardless of their belief, race, creed, sexual orientation, or gender.”

Supporters of homosexual marriage, however, have been unable to leave the issue and “agree to disagree.” Nothing less than the public shunning and humiliation — and, if at all possible, the total destruction — of the successful Christian business will do. Thus, along with the continued requisite Change.org boycott of the restaurant have come high-profile and politically motivated attacks in major cities where Chick-fil-A is quietly trying to conduct its business.

On July 19 Boston Mayor Thomas Menino got some free publicity by announcing that he would try to block the restaurant chain’s attempt to open a store in his town. “Chick-fil-A doesn’t belong in Boston,” Menino announced to the Boston Herald. “You can’t have a business in the city of Boston that discriminates against a population. We’re an open city, we’re a city that’s at the forefront of inclusion.”

Responding to rumors that Chick-fil-A was looking into opening a restaurant somewhere along the city’s Freedom Trail, a 2.5-mile brick path that commemorates the American Revolution and the nation’s quest for independence, Menino tried to correlate America’s own monumental founding with the attempts by homosexuals to normalize their aberrant lifestyle. “That’s the Freedom Trail,” intoned the mayor as he co-opted America’s rich heritage for his own politics. “That’s where it all started right here. And we’re not going to have a company, Chick-fil-A or whatever the hell the name is, on our Freedom Trail.”

In similar fashion, Chicago’s aggressively political Democratic machine mounted its own assault of the Christian company. On July 25 the Chicago Tribune reported that the city’s First Ward alderman, Poco “Joe” Moreno, would attempt to block Chick-fil-A’s attempts to open a restaurant in his neighborhood. “If you are discriminating against a segment of the community, I don’t want you in the 1st Ward,” Moreno told the Tribune. Referring to Cathy’s reasonably Christian comments as “bigoted” and “homophobic,” Moreno complained that “because of this man’s ignorance, I will now be denying Chick-fil-A’s permit to open a restaurant in the 1st Ward.”

Chicago’s mayor, Obama apparatchik Rahm Emanuel, attempted to ride the undercurrent of Moreno’s slavishly pro-homosexual comments, issuing a statement assuring Chicagoans that Chick-fil-A’s compassionate Christian values “are not Chicago values.” Emanuel insisted that Christian values “disrespect our fellow neighbors and residents” and would be “a bad investment” for the city.

As Moreno and Emanuel were posing as friends of the homosexual lobby, a more tolerant Chicago politician, Alderman Howard Brookins, Jr., said he would welcome Chick-fil-A to his 21st Ward. “People’s personal beliefs, unless they are way out of bounds, should not go into the decision as to whether a company should come into a particular area,” Brookins told the Chicago Tribune. Alderman Brendan Reilly of the 42nd Ward, where Chicago’s only current Chick-fil-A is located, agreed with Brookins’ assessment, saying that unless there is evidence that the chain is actively discriminating against someone, the best philosophy is to live and let live. “If citizens find the corporation’s views distasteful, they can vote with their feet,” Reilly said.

Which is what the Jim Henson Company, owner of the “Muppets” franchise, has decided to do with regards to its contract with Chick-fil-A. According to the Los Angeles Times, the company responsible for Kermit the Frog, Miss Piggy, Ernie and Bert, and a host of other puppets that have enchanted children for over 30 years, had in recent months been working with Chick-fil-A to create toys for the restaurant chain’s kids meals. But the Jim Henson Company has now decided to pull the plug on the Chick-fil-A. The company took to its Facebook page to assure one and all that the “Jim Henson Company has celebrated and embraced diversity and inclusiveness for over fifty years,” and to announce that it had “notified Chick-Fil-A that we do not wish to partner with them on any future endeavors.”

In order to leave no doubts that it eschews the values embraced by Chick-fil-A and embraces the values of America’s minority homosexual community, the company added that “Lisa Henson, our CEO, is personally a strong supporter of gay marriage and has directed us to donate the payment we received from Chick-Fil-A to GLAAD” — the aggressively homosexual Gay and Lesbian Alliance Against Defamation.

Of course, those Americans whose hearts and minds resonate with the Christian values embraced by Chick-fil-A have been doing some voting as well. As the restaurant chain was absorbing the non-stop attacks of pro-homosexual groups and their backers, conservative radio talk-show host Mike Huckabee suggested that supporters of traditional values celebrate a Chick-fil-A Appreciation Day, launching an I Support Chick-fil-A Facebook page where people could register their support for the company. According to Baptist Press News, by July 25 over 200,000 people had signed on to the page to say that they would support the cause by eating at Chick-fil-a on August 1.

“Let’s affirm a business that operates on Christian principles and whose executives are willing to take a stand for the Godly values we espouse by simply showing up and eating at Chick-Fil-A on Wednesday, August 1,” Huckabee wrote on the page. “Too often, those on the left make corporate statements to show support for same-sex marriage, abortion, or profanity, but if Christians affirm traditional values, we’re considered homophobic, fundamentalists, hate-mongers, and intolerant.”

Huckabee emphasized that “there’s no need for anyone to be angry or engage in a verbal battle. Simply affirm appreciation for a company run by Christian principles by showing up on Wednesday, August 1 or by participating online — tweeting your support, or sending a message on Facebook.”

Apparently, someone with access to the inner workings of Facebook’s online machine couldn’t tolerate the success of the campaign. On July 24 the “I Support Chick-fil-A” page disappeared from Facebook for 12 hours, prompting Huckabee to comment when it finally re-appeared: “We caught a 12-hour bug — apparently it hits when large numbers of Christians support something and post about it on Facebook!” Huckabee later wrote that Facebook had “decided to censor and delete the entire event page, and it was down for over 12 hours until they finally decided that maybe that wasn’t really smart.”

Meanwhile, Dan Cathy and the management of Chick-fil-A have determined that they will concentrate on keeping business as usual their main focus. “From the day Truett Cathy started the company, he began applying biblically-based principles to managing his business,” the company said in a statement as it attempted to distance itself from the ongoing fray. “For example, we believe that closing on Sundays, operating debt-free, and devoting a percentage of our profits back to our communities are what make us a stronger company and Chick-fil-A family.”

The company said that its “mission is simple: to serve great food, provide genuine hospitality, and have a positive influence on all who come in contact with Chick-fil-A.”