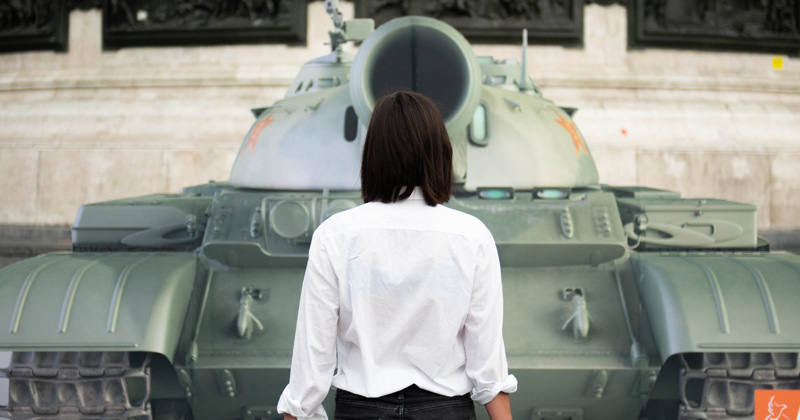 Amid public outrage over the NBA cowering to China and Blizzard Entertainment banning a pro-Hong Kong gamer, it’s worth noting that Alex Jones was purged from social media last year after warning about ChiCom infiltration of US industries and culture.

In short, Jones was the first domino to fall – and was the first because he blew the whistle on American companies increasingly agreeing to Chinese-style censorship and control in exchange for doing business in China.

Now any American who supports the Hong Kong protests – or free speech in general – is facing censorship just like Alex Jones, but they’re now at the Rubicon in which they must choose between protecting free speech or bowing down to a foreign government.

First they came for Alex Jones…

But we’re all Alex Jones now: Stand up to ChiCom censorship or lose free speech forever.

Chinese dominance is also penetrating US politics, as Jones warned President Trump in the aftermath of Sen. Dianne Feinstein (D-Calif.)’s staffer who was exposed as a Chinese spy.

As Jones explained in Aug. 2018, with the transcript provided by RealClearPolitics:

Mr. President, you know the Office of Personnel Management [hack] was done by insiders, that’s even come out in intelligence reports. They have tried to keep it quiet because it’s such treason, it’s unbelievable.

We know China owns the majority of our debt after the private Federal Reserve. We know they now own Hollywood.

You’ve helped block some of them buying up American Bandstand, a few final things they didn’t own. We know that they’re teaching Maoism in the colleges of all 50 major state-funded colleges, have major ChiComm infiltration.

Some of them are run by the ChiComms, even The Washington Post had to admit. We know that the people’s army of China has been caught running Dianne Feinstein’s operation.

We know their penetration is hundreds of times that of the Russians.

We know they’re involved in election meddling, and they’re so arrogant they went to Davos a year and a half ago and said they would stop your agenda, along with Junker.

…And if you make the fact that we need an Internet Bill of Rights, and anti-trust busting on these [Big Tech] companies, if they don’t back off right now.

And if you don’t come out and point out that the communist Chinese have penetrated and infiltrated and are way, way worse than the Russians — because it’s true, and the Democrats are scared of that coming out.