Anonymous Supposedly Plans to “Kill” the Internet on March 31 … Planned DDOS campaign against DNS is meant to highlight piracy legislation issues. Al Gore may have finally met his match. While members of Anonymous aren’t planning on inventing the internet, they are planning on destroying it – supposedly … The DDOS campaign is expected to target the world’s 13 domain name servers (DNSs), that allow the public to use the internet by translating human legible text-string URLs into machine-readable IP addresses. If the attack indeed materializes and if the DNS servers are all taken down, the Mayan apocalypse could come early — the internet could blink offline. – DailyTech

Free-Market Analysis: Julian Assange wants to run for public office in Australia, his home country, and Anonymous wants to destroy the Internet, temporarily anyway. We are not surprised. Once more, it would seem, Anonymous is acting as a friend of the powers-that-be. More toward the bottom of the article.

Some background … The Internet is like the Gutenberg Press before it. During the era of the Gutenberg Press, the social order was overturned. The Renaissance, Reformation and Enlightenment rolled like waves over Europe and America.

While history – real history – is admittedly a foggy occupation, it would seem that in the modern era, history is shaped by the competing forces of elite control and communication technology. When the Gutenberg Press came along, it had an explosive impact on the Way the World Worked.

People read books and the result was the reestablishment of logic and science – and a growing discontent with theCatholic Church, which was evidently and obviously misrepresenting the Bible.

The elites of the day fought back by trying to get ahead of public discontent. Instead of letting the Gutenberg Press take its course, the elites apparently supported the inevitable social upheaval by apparently funding both Martin Luther and John Calvin.

These two religious visionaries helped split up the Roman Catholic Church, which was apparently to the advantage of some controlling elites. But in the end, it seems obvious that the elites could not entirely control the forces that the Gutenberg Press had unleashed.

The elites of the day apparently encouraged war and social chaos. They seem to have helped fund Oliver Cromwell, who overthrew England’s royal system, and tried to use people’s burgeoning discontent to shape society in a certain way.

We know they were not entirely successful because of the creation of first the US confederation and then the United States of America. It would take several wars over nearly 150 years to even begin to turn the tide against freedom and individual human action.

The 20th century was the apogee of the modern elite’s success. Using dominant social themes, the power elite of the modern era was able to frighten citizens in the West into giving up power and wealth to globalist facilities. The elites dream of global government and a global money.

But as what we call the Internet Reformation proceeds apace, the ability of the elites to counteract it is looking as hopeless now as back when the Gutenberg Press was being confronted and its manifestations manipulated.

Human beings – naked apes – tend to use tools to their fullest extent over time. Why wouldn’t this historical trait hold true as well for the Internet?

In the 21st century, the Internet has done tremendous damage to elite memes of social control. Everything fromglobal warming to the so-called war on terror to the real, tested efficacy of vaccines has come under attack.

By allowing people to read source material for themselves, the Internet has eviscerated many of the controlling myths of the day in much the same manner as the Gutenberg Press exploded myths propounded by the Roman Catholic Church some 500 years ago.

And we think we can see the same power elite manipulations today as then. War, economic upheaval and outright repression are the chosen tools of power elite pushback. But still the Internet Reformation rolls on, in our view.

The result is a massive subterranean conflict. In order to martial support for their perspectives, the elites have, in our view, begun cultivating a number of false flag facilities. Among the most prominent recent ones may be Julian Assange and Anonymous.

The parallels to Luther and Calvin would seem somewhat clear. The idea is to create a controlled opposition that rolls back the truth-telling of the Internet by confusing the larger message.

When the Assange/WikiLeaks phenomenon first began we wrote a series of fictional stories that might have applied to him, indicating the possibility he was part of a controlled opposition. The same goes for Anonymous. The first story was “Comes a Blond Stranger,” followed by some further commentary in “Truth About WikiLeaks?”

We also predicted that Assange would run for public office. We did this by using the career of other modern “controlled opposition” figures as a blueprint. Sure enough, we now read the following, courtesy of InfoWars:

Wikileaks founder and accused sex offender Julian Assange wants to turn his notoriety into a job with the Australian government. He has announced he will run for the Australian senate as a “libertarian.”

Assange says the United States is in “serious decline” and will lose its super power status over the next few years. In response, Assange believes the average Australian should be taxed more and the money spent on defense and intelligence.

He says his political model is Malcolm Fraser, the former Australian prime minister who sold himself as a free market Thatcherite but instead increased government taxes and spending. He supported U.S. foreign policy and Indonesia’s annexation and occupation of East Timor which led to over 100,000 deaths.

Assange’s political philosophy seems to be based on the un-libertarian concept of government force, although he told The Age he is a defender of liberty and “the right of citizens… to live lives free from state interference.”

Meanwhile, Anonymous continues to pursue what we consider somewhat doubtful protests. In fact, if Anonymous DOES succeed in destabilizing the Internet, it will likely only upset people.

It won’t necessarily make them reflect on the world’s growing authoritarianism. It may make them look with more skepticism at the alternative media movement that Anonymous is supposedly aligned with.

More ominously, even, it will feed into the elite meme that the Internet is a dangerous and unpredictable place, one that needs to be rigorously controlled and scrutinized. Anonymous, within this context, has just reaffirmed its place as a great argument for SOPA and increased Internet censorship generally. Coincidence?

Well … who actually knows what Anonymous is? There have been allegations all along that the group was in a sense a controlled opposition because its targets were almost invariably private enterprise. And recently, it was revealed that the FBI had “turned” one of its leaders, who is now facing a trial and jail.

Ironically, Anonymous plans its project to as a PROTEST of SOPA! Here’s how the group puts it: “To protest SOPA, Wallstreet, our irresponsible leaders and the beloved bankers who are starving the world for their own selfish needs out of sheer sadistic fun, On March 31, anonymous will shut the Internet down.”

Will Assange win election to the Senate? Will Anonymous shut down the Internet? We submit the bigger question is: Who is actually in charge and why are they making the moves they are making? The elite uses dominant social themes – false-flag promotions – to manipulate people into going along with global government. The Internet Reformation stands athwart that.

Conclusion: Each individual must make up his or her mind as to the validity of this paradigm and all the conclusions that flow out of accepting such a vision or rejecting it. Assange and Anonymous will then be seen within the context of these perceptions – for better or worse. 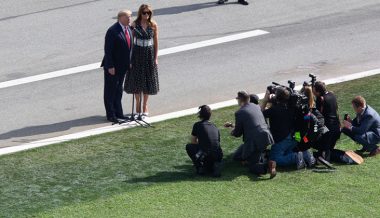