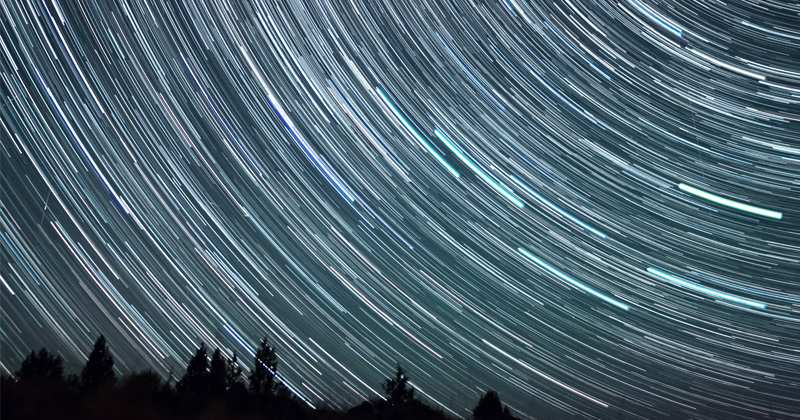 Astronomers announced the discovery of a ghostly, almost perfectly circular, arc of ultraviolet emission centered on the handle of the Big Dipper and stretching 30 degrees across the Northern sky.

If the arc were extended, it would completely encircle the Big Dipper with a diameter of 60 degrees.

This unique object was discovered by Andrea Bracco, an astronomer at the Ruđer Bošković Institute in Zagreb, Croatia, Marta Alves, an astronomer at Radboud University in the Netherlands, and Robert Benjamin, a professor of physics and astronomy at the University of Wisconsin-Whitewater in the United States. Benjamin, who contributed to the analysis of the structure, presented the team’s newest results at an on-line meeting of American Astronomical Society on June 2. A report on the discovery has been published in the April volume of Astronomy & Astrophysics Letters.

The arc, stretching beyond the constellation Ursa Major, is 30 degrees long, a fraction of a degree thick, and made of compressed, energized interstellar gas. The source of the energy and the arc shape indicate an advancing shock wave from a stellar explosion or supernova which occurred 60 degrees above the plane of the Milky Way Galaxy. The distance and age of the explosion which created the shock wave is highly uncertain. The team estimates that the explosion occurred more than 100,000 years ago at a distance of approximately 600 light years.

Because the full circle covers nearly 2,700 square degrees of sky, the blast may have been partially responsible for creating a clearing of gas and dust above the sun. “This region of the sky is known for several interstellar windows used to study the properties of galaxies outside the Milky Way. This arc may be evidence for one of the explosions that created these windows,” said Benjamin.

The arc was discovered in an archival dataset of ultraviolet images taken by NASA’s Galaxy Evolution Explorer (GALEX) as part of the GALEX All-Sky Imaging Survey and found using the Aladin Sky Atlas developed by CDS, Strasbourg Observatory, France. By comparing the brightness of the emission in two different ultraviolet bands, the team argues that the ultraviolet emission arises predominantly from a compressed region of hydrogen gas.

The origin of the discovery dates to 1997, when Peter McCullough, now an astronomer with the Space Telescope Science Institute, used an experimental camera which detected faint H-alpha emission to discover a two-degree-long straight line of H-alpha hydrogen gas across the sky, making it roughly the length of five moons put side-by-side. H-alpha is an optical (red) emission line produced by hydrogen gas. McCullough showed the pictures to Benjamin at a conference both were attending.

“In astronomy, you never see perfectly straight lines in the sky,” said Benjamin. “I got really interested, and Peter and I wrote a paper together, effectively saying ‘There’s this odd straight line in the sky, what could it be?'”

Nearly 20 years later, this work attracted the attention of Marta Alves who decided to observe the object using LOFAR, a network of low-frequency radio telescopes principally located in the Netherlands. “The fact that you have data in different wavelengths, it gives you more constraints as to the physical origin,” noted Alves. Her colleague, Andrea Bracco, then found the ultraviolet arc while searching for archival datasets which could help them interpret the low-frequency radio observations.

Much to their surprise, the two-degree line of H-alpha stretched into a 30-degree arc in these ultraviolet observations. “Frankly, I could not believe that such a great structure in the sky was not known yet. I was looking at ultraviolet observations from 15 years ago,” said Bracco. But some of their colleagues expressed concern that it might be a flaw in the data. In October 2018, Bracco and Alves met Benjamin at a workshop sponsored by the Université Paris-Saclay, where they invited him to help them interpret the arc.

Additional confirmation of the arc’s existence came when the team contacted a group of amateur astronomers in Massachusetts who were conducting their own survey of the sky using a robotic telescope based in New Mexico: the MDW (Mittelman/di Cicco/Walker) H-alpha survey. When contacted, they uncovered a 10-degree section of an optical arc in the same area where the GALEX ultraviolet arc was seen. They contributed their observations to the paper; additional researchers based in France (Andrew Lehmann, Francois Boulanger, and Ludovic Montier) also joined the effort to help in interpreting the ultraviolet emission.

So, what’s next? In addition to getting better constraints on the distance, age and physical size of the “Ursa Major Arc,” Alves noted that the ultraviolet discovery may help us better understand radio frequency telescope observations of the sky. “It opens the door for more low-frequency radio observations. We have UV and H-alpha now, adding in the radio observations would be really cool.”