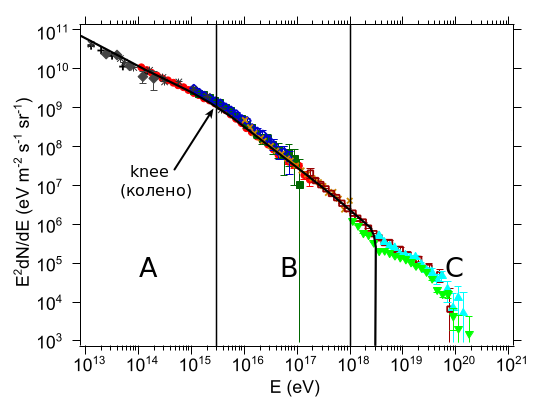 A team of scientists from Russia and China has developed a model explaining the nature of high-energy cosmic rays (CRs) in our galaxy.

These CRs have energies exceeding those produced by supernova explosions by one or two orders of magnitude. The model focuses mainly on the recent discovery of giant structures called Fermi bubbles.

One of the key problems in the theory of the origin of cosmic rays, which consist of high-energy protons and atomic nuclei, is their acceleration mechanism. The issue was addressed by Vitaly Ginzburg and Sergei Syrovatsky in the 1960s when they suggested that CRs are generated during supernova (SN) explosions in the galaxy. A specific mechanism of charged particle acceleration by SN shock waves was proposed by Germogen Krymsky and others in 1977. Due to the limited lifetime of the shocks, it is estimated that the maximum energy of the accelerated particles cannot exceed 1014-1015 eV.

Explaining the nature of particles with energies above 1015 eV is key. A major breakthrough in researching the acceleration processes of such particles came when the Fermi Gamma Ray Space Telescope detected two gigantic structures emitting radiation in the gamma-ray band in the central area of the galaxy in November 2010. The structures are elongated and symmetrically located in the galactic plane perpendicular to its center, extending 50,000 light-years, or roughly half of the diameter of the Milky Way disk. These structures became known as Fermi bubbles. Later, the Planck telescope team discovered their emission in the microwave band.

The nature of Fermi bubbles is still unclear, but the location of these objects indicates their connection to past or present activity in the center of the galaxy, where a central black hole of 106 solar masses is believed to be located. Modern models relate the bubbles to star formation and/or an energy release in the galactic center as a result of tidal disruption of stars during their accretion onto a central black hole. Similar structures can be detected in other galactic systems with active nuclei.

Dmitry Chernyshov (MIPT graduate), Vladimir Dogiel (MIPT staff member) and their colleagues from Hong Kong and Taiwan have published a series of papers on the nature of Fermi bubbles. They have shown that X-ray and gamma-ray emission in these areas is due to processes involving relativistic electrons accelerated by shock waves resulting from stellar matter falling into a black hole. In this case, the shock waves should accelerate both protons and nuclei. However, in contrast to electrons, relativistic protons with bigger masses lose hardly any energy in the galactic halo and can fill the entire volume of the galaxy. The authors of the paper suggest that giant Fermi bubble shock fronts can re-accelerate protons emitted by SN to energies greatly exceeding 1015 eV.

Analysis of cosmic ray re-acceleration showed that Fermi bubbles may be responsible for the formation of the CR spectrum above the “knee” of the observed spectrum, i.e., at energies greater than 3×1015 eV (energy range “B” in Fig. 2). To put this into perspective, the energy of accelerated particles in the Large Hadron Collider is also ~1015 eV.

“The proposed model explains the spectral distribution of the observed CR flux. It can be said that the processes we described are capable of re-accelerating galactic cosmic rays generated in supernova explosions. Unlike electrons, protons have a significantly greater lifetime, so when accelerated in Fermi bubbles, they can fill up the volume of the galaxy and be observed near the Earth. Our model suggests that the cosmic rays containing high-energy protons and nuclei with energy lower than 1015 eV (below the energy range of the observed spectrum’s “knee”), were generated in supernova explosions in the galactic disk. Such CRs are re-accelerated in Fermi bubbles to energies over 1015 eV (above the “knee”). The final cosmic ray distribution is shown on the spectral diagram,” says Vladimir Dogiel.

The researchers have proposed an explanation for the peculiarities in the CR spectrum in the energy range from 3×1015 to 1018 eV (energy range “B” in Fig. 2). The scientists proved that particles produced during the SN explosions and which have energies lower than 3×1015 eV experience re-acceleration in Fermi bubbles when they move from the galactic disk to the halo. Reasonable parameters of the model describing the particles’ acceleration in Fermi bubbles can explain the nature of the spectrum of cosmic rays above 3×1015 eV. The spectrum below this range remains undisturbed. Thus, the model is able to produce spectral distribution of cosmic rays that is identical to the one observed.