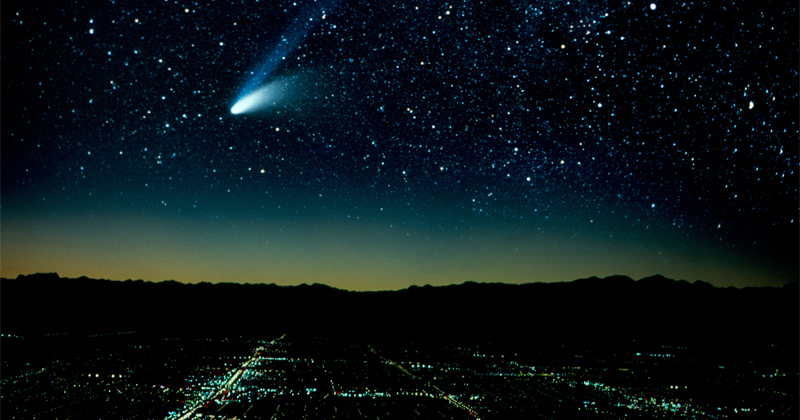 Astrophysicists from Far Eastern Federal University (FEFU, Russia), South Korea, and the USA appear in Monthly Notices of the Royal Astronomical Society, suggesting carbon indicates time comets have spent in the Solar System — the less carbon, the longer they have been in the proximity of the Sun.

The proof is their study of the comet ATLAS (C/2019 Y4) approaching the Earth in May 2020 and disintegrated with displaying a major outbreak of the carbonaceous particles.

FEFU astrophysicists, Ekaterina Chornaya and Anton Kochergin joined an international team to analyze the composition of dust particles in the coma, i.e. shell, and tail of Comet ATLAS (C/2019 Y4). According to the researchers, the levels of carbonaceous matter inside the comet were very high.

The team suggest that the amount of carbon in the comas of other comets can indicate the time spent by them in the Solar System. The more carbon a comet coma contains, the less it has been around the Sun, and vice versa.

Comet ATLAS approached the Earth in May 2020 drawing a major interest among the researchers from all over the world, having disintegrated almost literally in front of their eyes.

“ATLAS was expected to be the brightest comet of 2020, visible from the Earth with a naked eye. However, instead of observing the comet itself, we witnessed its disintegration. Luckily, we had begun photometric and polarimetric studies before the process started, and because of that, we are able to compare the composition of the coma before and after the disintegration. In the course of disintegration we noticed a dramatic growth of the positive polarization branch which, according to modeling, is consistent with a high concentration of carbonaceous particles,” said Ekaterina Chornaya, a postgraduate at the School of Natural Sciences, FEFU.

According to Ekaterina, Comet ATLAS was a long-period comet — it used to enter the Solar System once in 5,476 years. Long-period comets approach the Sun only occasionally and therefore are rarely subject to heating. Researchers are especially interested in these comets, as they contain a lot of preserved primordial matter, ancient elements that were formed in the early days of the Solar System. Under the influence of solar radiation, the primordial matter starts to evaporate, and that is when the researchers on the Earth get a chance to study it. In short-period comets that approach the Sun frequently the volume of the primordial matter is very low.

Scientists from all over the world study and compare the physical and chemical composition of dust particles from the comas of comets to learn more about the evolution of the Solar System. To do so, they analyze the ability of such particles to absorb, refract, and polarize light.

According to Ekaterina Chornaya, the polarimetric response of the particles from Comet ATLAS matches that of one of the brightest comets in the history of Earth — Comet Hale-Bopp, or C/1995 O1 (though several epoch suggest that ATLAS is closer to Comet Hyakutake, or C/1996 B2).

The members of the research team represented the School of Natural Studies of FEFU, the College of Humanities of Kyung Hee University (South Korea), the Department of Astronomy and Space Sciences of Kyung Hee University (South Korea), Institute of Applied Astronomy of the Russian Academy of Sciences, and the Institute of Space Sciences (USA).