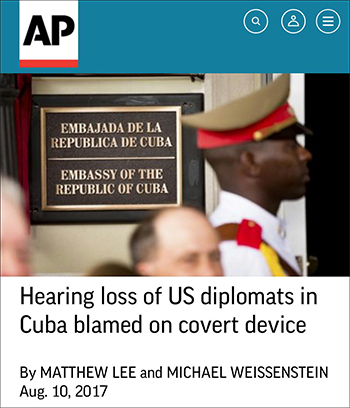 The State Department announced Thursday that more than a dozen Americans connected to the U.S. Embassy in Havana, Cuba, have been affected by mysterious health incidents.

Heather Nauert, a spokeswoman for the agency, confirmed to reporters at a press briefing that 16 U.S. diplomats have experienced symptoms related to what the State Department has described as “attacks.”

.@statedeptspox: We can now confirm that at least 16 USG employees were affected by attacks in #Cuba pic.twitter.com/UEy1PJ7bXt

“We can confirm that at least 16 U.S. government employees, members of our embassy community, have experienced some kind of symptoms,” Nauert said. “They have been provided medical treatment in the United States, as well as in Cuba.”

The incidents began in late 2016 when embassy staff began to complain of numerous health issues including hearing loss, headaches and nausea.

The Associated Press reported earlier this month that an investigation by U.S. officials linked the symptoms to “a covert sonic device.”

“U.S. officials concluded that the diplomats had been exposed to an advanced device that operated outside the range of audible sound and had been deployed either inside or outside their residences,” the AP wrote. “It was not immediately clear if the device was a weapon used in a deliberate attack, or had some other purpose.”

The State Department retaliated in late May by expelling two Cuban diplomats from their embassy in Washington D.C. – a move condemned by Cuba at the time as “unjustified and baseless.”

“Cuba has never permitted, nor will permit, that Cuban territory be used for any action against accredited diplomatic officials or their families, with no exception,” the Cuban government said in early August.

Medical records reviewed by CBS News Wednesday revealed that the U.S. diplomats were diagnosed with conditions as serious as “mild traumatic brain injury” with “likely damage to the central nervous system.”

While the episode has been described as “unprecedented” by the State Department, some experts remain skeptical regarding the use of sonic weapons.

John Sipher, a 28-year veteran of the Central Intelligence Agency’s National Clandestine Service, speculated Monday that the incident may have been a “surveillance effort gone wrong.”

“We have very little experience anywhere in the world with directed attacks designed to physically harm our diplomats,” Sipher wrote at Just Security. “However, the use of intrusive technical collection and surveillance which sometimes causes harm in its own right, is consistent with past practice in Cuba and elsewhere.”

Sipher added that such an attack, at least from the Cuban government, would be an unlikely event given the timing.

“If the operations began shortly after the US presidential elections, it would have been irrational for Cuba to start out relations with the incoming administration in this manner,” Sipher wrote. “Further, I suspect if the Trump Administration believed Cuba sought to purposely harm U.S. diplomats, they would have reacted in a more aggressive and public manner.”

U.S. investigators are also looking into the possibility that an outside country, such as Russia – concerned over the growing relationship between the U.S. and its longtime ally – carried out the suspected operation without the knowledge of Cuba.