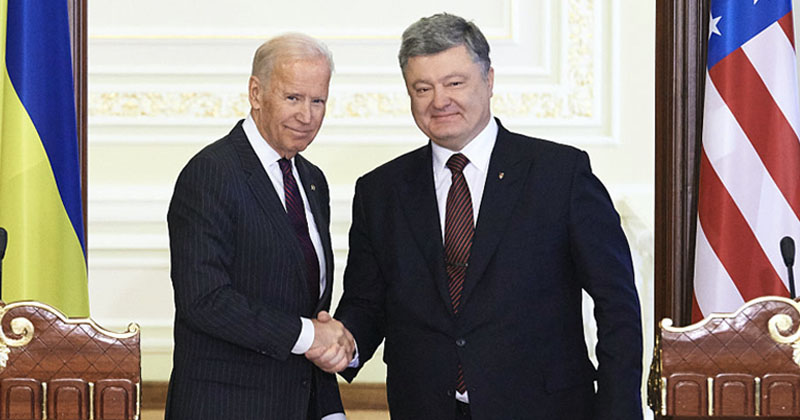 “I would like to urge to consider the possibility of solving the problem of replacing Prosecutor General Shokin because, to my opinion, he blocked the reform of clearance of Prosecutor General’s Office,” Kerry told Poroshenko in 2015, adding, “I know the Vice President is very concerned about this…”

In a recording from March 2016 – four days before Shokin was fired – Biden is heard speaking to Poroshenko about the $1 billion U.S. aid to Ukraine.

“Tell me that there is a new government and a new prosecutor general, I am prepared to do a public signing of the commitments on 1 billion dollars,” Biden said. “Again, I’m not suggesting that that’s what you want or don’t want.”

“And again, it wouldn’t be finalized until, you know, the IMF pieces are written.”

Poroshenko replied: “Extremely strong motivation. One of the possible candidates for this position is the leader of my faction Lutsenko.”

“If you think that a politically motivated figure could be not very good, from your point of view, I recall this proposal. Cause nobody knows that I am going to propose Lutsenko,” the president explained.

In another recording from late 2016, Biden tells Poroshenko to nationalize Privatbank – Ukraine’s largest commercial bank – before Donald Trump was sworn in as president in January 2017.

The audio appears to confirm what Biden himself said in 2016 during a Council on Foreign Relations event, where he openly bragged about threatening to withhold $1 billion in financial aid to Ukraine if Poroshenko didn’t fire Shokin.

Hunter Biden received $50,000 a month while sitting on Burisma’s board of directors since 2014 despite having no energy, environmental, or managerial experience.

Additionally, Hunter admitted in a disastrous ABC interview in October 2019 that he likely would not have been offered a seat on the board if he wasn’t the vice president’s son.

Derkach, who is investigating Ukraine’s corruption in relation to the 2016 U.S. election, accused Biden of receiving $900,000 for “lobbying activities” by the Burisma Group.